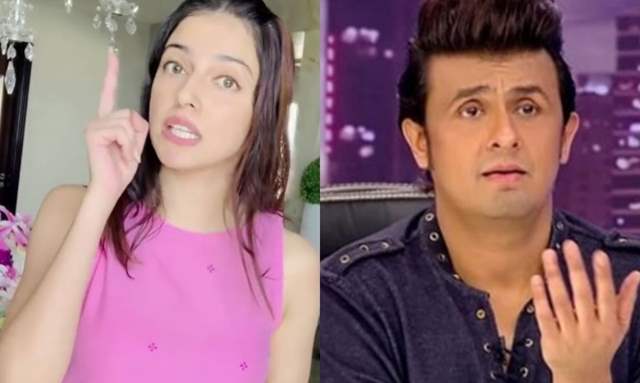 A few days after singer Sonu Nigam shared a video calling out the ‘Music Mafia’ in the industry, he shared another video where he slammed T-Series head honcho, Bhushan Kumar with an open warning.

While Sonu did not take any names in his first video, he later alleged Bhushan Kumar of maligning his name in the media for speaking out against favouritism in the music industry. Sonu openly challenged Bhushan Kumar of messing with the wrong person and also made shocking revelations against Kumar. He also threatened to expose Bhushan Kumar in connection to Marina Kunwar’s MeToo controversy and threatened to upload a video on his Youtube channel.

And now, Bhushan Kumar’s wife and director Divya Khosla Kumar has hit back at Sonu Nigam with a furious video. She lashed out at the singer for his campaign against T Series and questioned why the singer has not introduced any new talent in the industry.

In the 11 minutes long video, Divya said that T-Series has given chance to many new talents and pointed out that 97% of people working in T-Series are outsiders, not industry kids. She said, "You (Sonu) are such a legend. How many people have you given a break to? No one."

Divya also revealed that it was T-Series who gave Sonu his first chance. She said, "He used to sing in Delhi’s Ramleela for Rs 5. It was there that Gulshan Kumar spotted him, recognised his talent and gave him a flight ticket to Mumbai.”

She also called her cook Sheru to talk on camera, who has been associated with T Series for the last 18 years to talk about Sonu Nigam’s journey with the music label.

Reacting to the numerous allegations made by Sonu Nigam against Bhushan Kumar, Divya explains: “When Gulshan Kumar was assassinated, Sonu Nigam left T-Series and joined another music company instead of helping Bhushan Kumar during T-Series’ trying times. And it was during that time Bhushan asked Sonu to do the ‘Deewana’ album, which he did, but today he is making an issue out of the same matter.”

A visibly angry Divya then went on to answer Sonu Nigam’s threat to Bhushan Kumar in connection to Marina Kuwar’s MeToo allegations against Kumar. Divya defended that the allegations were fake and claimed that the police have also termed the allegations baseless. She also mentioned that they decided to not press charges against women who allegedly falsely accused Bhushan.

Divya also mentioned that ever since Sonu Nigam put out the video, her family has started receiving threats on social media.  She said, "I'm receiving rape threats, Bhushan is getting death threats and my son is being threatened on social media. Why should I tolerate all this?"

In the last few minutes of the video, Divya stated that she did not want to react to Sonu’s video as Bhushan Kumar had told her to stay silent but she adds that Bhagavad Gita reminded her of her karma and inspired her to raise her voice against wrong and stand by the truth.

Concluding the video, Divya Kumar Khosla said, "The war is on", and captioned it as, "The bitter truth #Sonunigam (sic)."

Check out the whole video here:

While Divya has turned off the comments section under her post, Sonu Nigam shared her video and wrote: " Presentttttting Divyaaaaa Khoslaaaaa Kumaaaaar. I think she forgot to open her comments. Let's help her in that. "

Grand Janmashtami celebration in 'Anupamaa', will it turn ...
4 minutes ago

Karan Singh Grover on quitting Kasautii Zindagii Kay: It was ...
30 minutes ago

Bandish Bandits Receive Praises and Blessings From Legendary ...
35 minutes ago

Late Jiah Khan’s Mother Rabya Slams Bollywood Mafia As She ...
an hour ago