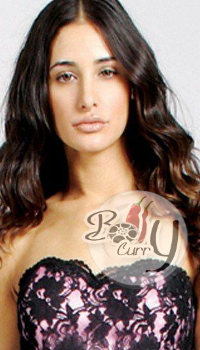 tabloids due to her alleged relationship with co-star Ranbir Kapoor, the actress herself was made to consciously maintain a low profile during the making of their highly anticipated November release, Rockstar.

The foreign-born beauty previously appeared in season 2 of America's Next Top Model, but it was her Kingfisher Calendar shoot which marked the start of her journey towards this coveted Bollywood debut. Nargis was mostly shielded from paparazzi during the shooting and early phases of promotion, and consequently as the film nears its release, Fakhri's unveiling - be it at a Dandia event in Ahmedabad, or more recently via Twitter's ever faithful propaganda - is surrounded by that dash of intrigue among media, audiences and critics which has all but raised anticipation!
Her recent account on Twitter has been home to a whole range of unseen snippets from the film – a dual promotion means, for the movie and its debutante!
Among Fakhri's maiden tweets was one including a shot of herself sporting a sleeveless jacket, which read, "Me wearing da boys Rockstar vest! Why do they get all da cool stuff! I hope they make me sumthing" [(c) Twitter]
Yet later she tweeted two more pictures, one of Ranbir with Imtiaz and Mohit Chauhan; and the second of herself alongside Mohit and Ranbir.
Riding high on the hype of the yet unreleased Rockstar, making waves and going places already, Nargis Fakhri might well be the next big diva to watch out for!

Before Death, SP Balasubrahmanyam Has Sung For Upcoming ...
25 minutes ago

Sushant's Family Displeased With Attention Being Diverted ...
27 minutes ago

After Ten Months Jacqueline Fernandez has Finally Re-united ...
37 minutes ago