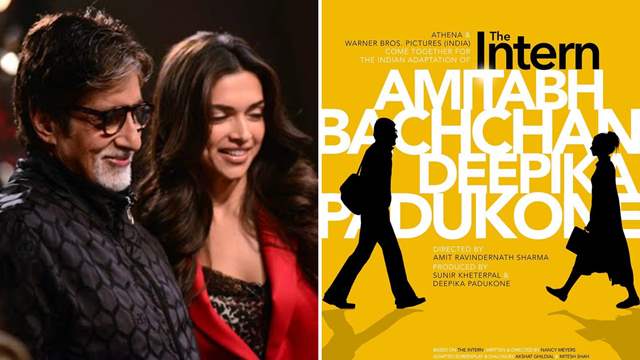 The Hindi remake of the Hollywood film ‘The Intern’ was announced back in January 2020. Deepika Padukone and Rishi Kapoor were slated to step into the shoes of Anne Hathway and Robert De Niro.

However, in a series of unfortunate events,  Rishi Kapoor passed away in April 2020, and the lookout for another actor to reprise his character began.

Well, the wait is over as it is confirmed that superstar Amitabh Bachchan will now be a part of the Indian adaptation of ‘The Intern’ alongside Deepika Padukone.

DP took to her Instagram handle to announce the same as she dropped the first poster of the film. Have a look:

Big B and Deepika worked together in the film Piku and the audience seemed to really love their on screen camaraderie. Excited about reuniting with the superstar again, DP wrote alongside her post:

“What an absolute honour to be collaborating with one of my most special co-star again Welcoming @amitabhbachchan to the Indian adaptation of #TheIntern.”

The Hindi remake is being directed by Amit Sharma, best known for films like Udaan, Badhaai Ho, Tevar among others. Produced by Sunir Kheterpal and Deepika Padukone’s Ka Productions, presented by Warner Bros India, the film seems to be worth looking out for!