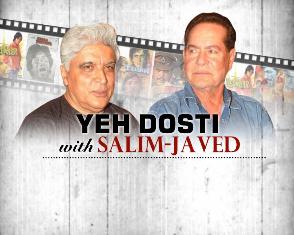 Following the re-release of one of Bollywood's biggest hits, Sholay in an all-new 3D avatar, CNN-IBN, IBN7 and History-TV18 bring to their viewers Salim Khan and Javed Akhtar, the most celebrated Bollywood scriptwriter duo of all times. This special show will be the duo's first joint interview since they split up as a writing team in the early 1980s.

In a candid conversation with CNN-IBN Entertainment Editor Rajeev Masand, the legends revisit their biggest hit Sholay, while sharing their experiences on the sets of the film and the discovery of Amjad Khan as Gabbar. Once dubbed 'arrogant' and 'cocky', the writers explain why they were inflexible about their price, and discuss the clout they wielded, which allowed them to make casting decisions on the films they wrote.

In a particularly poignant moment, the former partners speak about their premature split and how it might have been averted had they acted with maturity.

Ishan. 9 years ago Yeah it should have been crowd puller !! Neways thanks for the article !!

desicrowd 9 years ago crowd seeker? what is she lonely...looks like someone needs a dictionary...

aczc 9 years ago alisha u shoud have said puller instead of seeker?was it a mistake?

bvs7691 9 years ago Juhi is beautiful in every sense! She doesnt need to seek any attention.... ! Fans/People automatically gets attracted to her natural beauty.... Love Her:))x

DigitalFortress 9 years ago shes one of the most cutest and the most adorable actress of bollywood!!Love her<3

akhl 9 years ago It should be crowd puller and not crowd seeker. Saying crowd seeker means that Juhi wants crowd.

Jenifer. 9 years ago Juhi's is one of those evergreen actresses; no matter how long a break she takes, people will always look forward to her films.

-veena.shona- 9 years ago she is one of my fav actresses :)
she is still very pretty :)
Veena