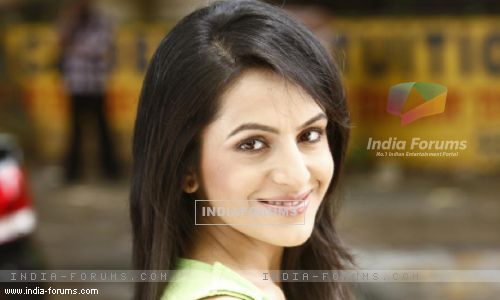 It is the season of Navratri, season of dance. So how can our television celebrities stay away from this dance festival? TellyBuzz had earlier reported about several TV actors who made special appearance as guests at various events in different cities. Well this time, we have Roop Durgapal who essays the role of Sanchi in Colors Balika Vadhu.
Roop had recently been to two events on the special occasion of Navratri - one in Jamnagar, Gujarat and the other in Indore, Madhya Pradesh. To know more about her experience being amid the pepped up crowd all set to groove on the dandiya beats, TellyBuzz got in touch with the young and petite actress.
She says, "I had been to Jamnagar for a Pre - Navratri event where people of all age groups had come to play Garba and Dandiya. I had been there as a guest for special appearance. The energy in the crowd was so fantastic that I too could not stop myself from dancing. Moreover, people there knew that I loved singing, so on their special request I sung a few songs on which they played Garba.
Besides Jamnagar, I had been to Indore for two events - Aradhna Garba on September 28 and Lakshya Garba on September 29. In Indore too had sung a few songs and people actually were dancing like crazy on the songs that I sung.
The best part what I love about all three events is that the crowd and people were so energetic and enthusiastic that I personally enjoyed being there. Also, I had dressed myself in a complete Indian attire with Anarkalis and Lehenga Choli. Post the event, I had been to the famous Sarfara market which is extremely famous for is eatery. All in all, I truly enjoyed all the events."
Well Roop, this sounds really amazing must say!
Upasana Patel
1 Likes

asad.shah 9 years ago Love u salman and love u sanjay too, U both r fab actors. Best of luck to both of u.