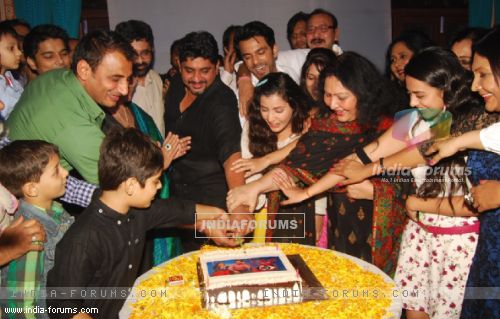 Rajan Shahi's much awaited show Itti Si Khushi hit the screens yesterday on Sony TV. The show starring bubbly actress Smriti Kalra and the good looking actor Anuj Sachdeva as the lead received a good review by everyone for their first episode.

Producer Rajan Shahi had arranged a get together on the sets of the show with the entire cast and crew along with his entire family of Director's Kut to watch the first episode of the show together. Happiness and excitement was easily seen on the faces of the entire cast and crew of the Itti Si Khushi before the start of the show. When the clock ticked 8 PM, everybody present on the sets, welcomed the show on screen with a big round of applause.

The stars of Rajan Shahi's previous shows and current shows like Angad Hasija, Adaa Khan, Kinshuk Mahajan, Kanchi Singh, Mishkat Verma, Lata Sabharwal Seth, Ashita Dhawan Gulabani etc. too were present to grace the occasion. They were seen praising and congratulating the producer and the cast of the show. The entire team of the show cut a cake together and greeted each other. Later all the stars present on the occasion rocked the dance floor with their dance moves.

The first episode of the show started off with Neha coming back to her home after getting discharged from the hospital. She was in coma for 12 years and she is back to her home to add colors of happiness in the lives of everyone around and she is welcomed wholeheartedly by her family members. The first episode also introduced Aman in a very cute way. The innocence of Neha won the hearts of the audience and now the love story of Neha and Aman will add more flavor to the show.

We wish the team of Itti Si Khushi good luck for their show!

6 years ago KINSHUK MAHAJAN hope your show come by this month,missing u like a hell.

6 years ago Love u so much KINSHUK MAHAJAN n miss u baby,hope your show come soon.

Waiting for your return Kinshuk !!

6 years ago Saw the interview of them together! Smriti Kalra and Anuj Sachdeva's offscreen chemistry is amazing! Hope they'll do same for onscreen for itti si khushi

6 years ago Loved the event video and pictures .All the best to Smiriti for her show Itti si khushi.

6 years ago Glad you attended Kinshuk and we can get a glimpse of you, miss you lots !!!

Best of luck to cast of Itti Si Khushi

+ 3
6 years ago Waiting for your new show Kinshuk Mahajan!

Best of luck for its success!

+ 3
6 years ago Waiting for ur show KINSHUK MAHAJAN . Now just end this suspense & let us know about the show & it's timings & all :((