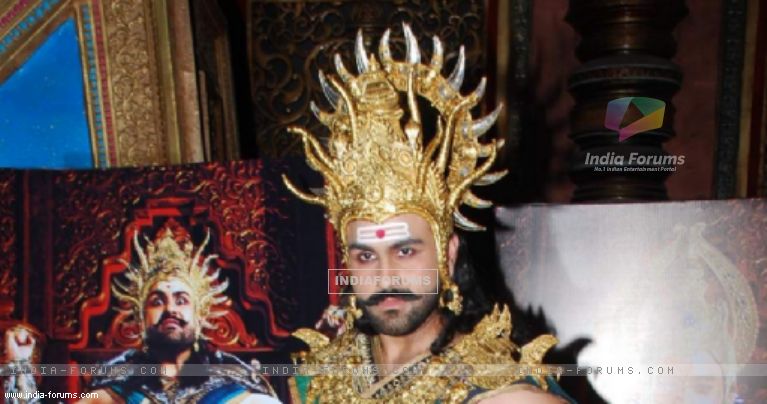 Bollywood actor Arya Babbar, rose to fame on television by entering in the house of Bigg Boss 8, is doing his first fiction show on television. The talented actor is all set to be seen as Raavan of Sony TV's newly launched mythological series, Sankat Mochan Mahabali Hanumaan (Contiloe Produtions).

In a conversation with TellyBuzz, Arya reveals that how he feels about getting decked up as Raavan and much more about the preparations he has done for it.

How has been your experience shooting as Raavan for the show so far?

It's the first time that I am doing a fiction show on television and I am really very excited about it. It's such a big show on Sony TV from Contiloe Films. I am playing the role of Raavan who is going to bring all the Sankat in Hanumaan's life. There is not a bigger negative character than Raavan in this entire universe. My experience shooting has been fantastic so far and I am enjoying myself in this role. The character is larger than life. Television has so many women oriented shows so as a male actor when you get an opportunity to play a strong and powerful role on Television, it excites you. And Raavan is one such colorful character. It's been a great experience till now.

It's your first fiction show on television. What made your opt for the role?

When I was offered for this role I saw that Raavan's character has so much to play with and so much can be done. So far whoever has played Raavan, has played it with two flavors till now - anger and ego. We haven't seen any other emotions of Raavan other than these and nothing else has been understood about him. We just know that Raavan is a big fat man who keeps laughing and screaming but there is more to act in it. He is a very intelligent, powerful and strong personality. Though he was a Brahman, he is known for being a demon. He was not as egoistic about his power as much as he was of his brain. This is the kind of Raavan that I want to play. I want people to remember this Raavan as a Genext Raavan who is mischievous and unpredictable.

So, this Raavan is going to be different from all other Raavans we have seen earlier?

It's completely different from all the other Raavans we have seen on-screen so far. From his looks, to performance and to his style and this time we are going to have a good looking Raavan (laughs) and I am really looking forward to it.

Tell us something about the preparations you have done for this role?

How much time do you take to get yourself decked up as Raavan?

Only wearing that takes around 20 minutes. Then, I take around 45 minutes to do my make up because the eye make-up is different, they put a Tika on my forehead, change the complexion of my face, work upon my mustache and do a different kind of styling.

How has Bigg Boss changed your life?

I entered the house with a motive that people should know about my book and when I came out people already knew about it and my book became one of the best-sellers. The show has given me a lot of recognition. I am very thankful to Big Boss and the entire team associated with that show. The show has also given me a brother for life - Upen Patel. Now he is in Nach Baliye 7 and I really appeal to the people to vote for UpMa; that's how Upen and Karishma (Karishma Tanna) are known as (smiles).

Very humbly I would like to say it all my fans that you all have always supported me, unconditionally, in whatever I have done. Sometimes I have done well while sometimes I was bad. This time I am going to entertain you all a lot. I request you to watch me as Raavan and its going to be very different shade of my personality on the show.

5 years ago Arya needs to improve asap.
The guy can do better than this.

+ 3
8 years ago salman khan!! name of never ending support to his friends. love you man.

+ 2
8 years ago wow salman is the best may he reach the heights of success :))