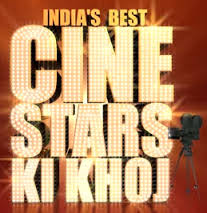 One of the popular talent based shows India's Best Cine Stars Ki Khoj is nearing its finale with six contestants bracing themselves to lift the ultimate trophy.

Zee TV's much admired show laid a path to the people across the nation to showcase their talent in front of esteemed judges Sonali Bedre, Anurag Basu and Vijay Krishan Acharya who would then become an actor, singer, dancer, performing stunts to get recognition in the industry.

Dashing actor Ayushmann Khurrana who rose to fame in the film Vicky Donor got recognition through this platform itself. He was the mentor for the contestants in its first few episodes Many popular faces of TV Divyanka Tripathi, Ankita Lokhande, Yuvika Chaudhary are riding high with their popularity and success but have efficiently shown their talent on this platform of Cinestars Ki Khoj.

The show has been really entertaining for the audience to watch.

The Grand Finale will see some of the noted actors who will handover the trophy to the deserving contestant. We also hear that  the winner will get an opportunity to work in Mahesh Bhatt's upcoming film.

Vishal Bharadwaj along with Shraddha Kapoor and Shahid the grace the occasion to promote their upcoming film Haider.

It will be quiet interesting to watch the Grand Finale episode.

"The people of this city stood behind me like a rock": Ayushmann's ...

DivianTanz_Divz 6 years ago Divyanka Tripathi is a gem found from this show.

PreruS 6 years ago Divyanka Tripathi ur amazing!! A true star in all proportions

DivianTanz_Divz 6 years ago Divyanka Tripathi and other from Cine stars ki khoj are gems.

Premeer_Mayur 9 years ago Sonu is the best singer in india. His voice is super duper awesome!

chammak_challo 9 years ago Sonu is the best singer in the industry. He is super talented & versatile...!