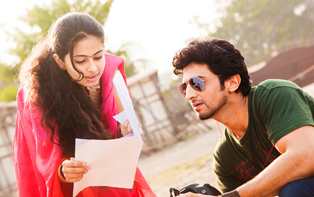 Sasural Simar Ka's fame Roli and Siddhant aka Avika Gor and Manish Raisinghani have been investing their time in making a Short Film. In conversation with TellyBuzz the duo shares the concept about the film, their inspiration in creating the film and much more...

Let's see what Avika and Manish have to share...

1. What inspired you to create a short film?  Why a short film and not something else (ad, feature film, etc)?

Manish: Our inspiration came from our fans who call themselves "rosidians and avimanians or manishains and avikanins and keep making wonderful creations and videos for us.  We decided to go for a short film because of limited resources.  They say necessity is the mother of invention and our necessity was to utilize our time between our shots in a constructive manner as well as for something we are passionate about.  Thus, since our common interest happened to be films we decided to use our limited resources to make a film so short film it is...in fact it's more of a trailer than a shot film as it ends with a mystery and leaves you curious by the end of it the way trailers do.

Avika: We thought of a short film because as by name it suggests its short which is very comfortable to make and also it's not bounded with conditions which ad films or feature films have since we were looking to experiment as first timers.  It also helps to bear all the flaws which happen in experimenting while learning and it's a film which is related to us and thought by us. Touch wood, fingers crossed if opportunity knocks the door we will surely think of many things.

2. How did you come up with the concept?
Manish: The concept was an outcome of vague ideas flying in our conversations and then picking up the most practical one which we can shoot with the limited recourses and with even more limited time on hand because both Avika and I both do a lot of work other than Sasural Simar Ka.

Avika: We had to do it on the set and with limited things we had so when thinking about a story this concept appeared great and we both finalized it.

3. The most memorable moment while creating this short film?

Manish: I believe this one particular shot which we hung the camera on a rope (Ouch!!! Was the feeling as my gadgets are my babies and I usually don't torture them like that) was then we achieved it in one take to perfection... I call it memorable because whenever we discussed this shot with anyone they laughed and called it absurd and impossible unless we have high-fi equipment like a jimmy jib at least and just by the two of us it was impossible. The min we got the shot both of us started jumping with joy... that was a kick and a high for us...

Avika: Memorable was the shot which was done with the rope where camera was tied with it and it was supposed to come down on its own shooting below the best one take shot. 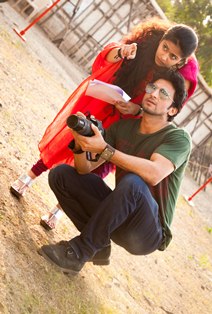 4. The greatest challenge while creating the film?

Manish: (Laughs) Time because like I said we both are multitasking and doing a lot of things other than SSK and so we had to shoot this film either before shoot or stay after shoot.  Avika's parents were extremely supportive and it took us a few months to shoot something which could have finished in two days.  We had to learn and then apply each one of the techniques...it was crazy but absolute fun...

Avika: I think while taking the shots according to the camera angle and marking on the copy that shot no. 1 is done ...etc etc

5. You have acted edited, directed, written dialogues and done everything.  What was the most difficult aspect?

Manish: I wouldn't say anything was difficult as such but it was all a learning experience... It was a thrill to learn what we did but what added to the fun or the challenge was multitasking like operating the camera giving cues and holding the lights to the other one. There were also times where we both of us had to be in the shoot and we had to roll the camera as well as act in the shot and manage the light.  In the teaser we have release, we have had to literally manage everything from our shadows to the lighting to achieve the perfect shot.

Avika: According to me everything is tough and viceversa everything after doing it once is easy. Once you try things without fear they become easy - my parents have taught me this.  The main thing is to enjoy what you do and I really enjoyed being a part of this short film. 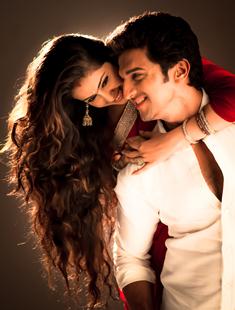 6. Anything that you feel you could have done better?
Manish: We felt that every moment and kept changing things every now and then as we knew what we wanted but we were also greedy to get the most we can.  Also the subject is a little complicated so we had to do our best to make sure that our painting is beautiful but not abstract...

Avika: Whatever small silly mistakes we made, we made sure we rectified them.  For a simple trailer, also we did re-shoot. And yes if there are any other loopholes we will try to rectify them in our next project.  While learning new things, you are bound to make mistakes.  That's why it's said that experience is the best teacher in life.

7. Manish and Avika have come together for this - were there ever any creative differences between the two of you?

Manish: Lots of them as both of us have wild imaginations and many a times it would be in the exact opposite direction.  However, the advantage we had was that both of us were open to listening and discussing so that the task goes smooth.  It was all a matter of understanding each others perspective without any preconceived notions from one side and clarity of thought to explain the perspective from the other side and touch wood we had that right through out so we were sorted. Ridiculing each others idea or calling it "my" idea was not even an option.

Avika: Every shot had different angles and different perspectives from both our sides but we were clear that we had to work as a team.  Hence, we chose to mix our ideas and create something that we both liked and approved of.


8. What qualities do each of you have that makes you a perfect team together?

Manish: Apart from all the wonderful qualities Avika embodies what tops the list is that she is my best buddy.  Thus even in difference of opinion we are always on the same page and she doesn't shy away from hard work nor do I.  She also does not shy away from voicing the most ridiculous idea or saying a No to my ridiculous plans and vice versa which made the journey really smooth and fun.  And the best and the funniest thing she said which I couldn't say No' to was 'Shinchan our initials are A(vika) and M(anish) just like A(bbas) M(astan) can you imagine so we make a kick ass team like them' and then she gave me a high five...to which I could reply was "inshallah" (smiles).

Avika: We are best friends and doing gossip is not a good idea and hence we both enjoy doing creative stuff and learning new things.  We both enjoy being constructive with our time.  We always try to get new ideas; new thoughts and sometimes even a stupid idea can create magic when worked at it...

Check out the video here: http://www.india-forums.com/video/entertainment/306715-tu-hi-mera-teaser-a-short-film-by-avika-gor-and-manish-raisingh.htm

manavissk 6 years ago Love manish raisinghani and rosid.Thank u for such a great gift, please make more short films like this

Mahiii 6 years ago Great thing to know... i am glad they are best buddies... I hope ur film is a hit buddies... Keep it up

@sexyangel that day i saw u bashing Tina and now Avika

IReema 6 years ago sanaya is a dog. Avika Gor and Manish Raishinghani are best

Avika.Gor 6 years ago Love you Avika Gor and Manish Raisinghani. Guys you rock as ROSID.

Naagin 5: Veer to return to destroy Bani and Jay?
2 minutes ago

Jaya Saha to be Arrested by the NCB Soon: Report
43 minutes ago