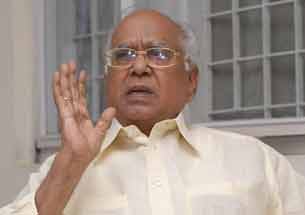 The industry members and eminent personalities from various walks of life made a beeline to pay their last respects to the thespian at Annapurna Studio, which he founded in the 1960s.

Shooting and other filmmaking activities were suspended as a mark of respect to the icon, who was the first film personality to shift base from Chennai to Hyderabad after formation of Andhra Pradesh in 1956.

Movie Artists Association (MAA) president Murali Mohan called for a total shutdown of the film industry Thursday to mourn the death of Rao. He also called for closure of all film theatres across the state.

Rao's family has not taken a decision in this regard.

On behalf of the industry, Murali Mohan requested Nageswara Rao's family to perform his last rites at Annapurna Studio as he built the facility and it was close to his heart. He requested Rao's actor son Nagarjuna to also build a memorial at the studio.

"It is a sad day not just for the Telugu and Indian cinema but for the world cinema. I don't think there was any actor in the world who was (around) 90 but was still acting," said Murali Mohan, a veteran actor.

Leading actors, filmmakers and other artists, leaders from various political parties and hundreds of fans poured in to pay their tributes. Some broke down while recalling their association with 'Natasamrat' as Nageswara Rao was known in film circles.

The thespian, who was battling intestinal cancer for the last few months, breathed his last at a private hospital in the early hours of Wednesday. He was 89.

In a career spanning over seven decades, Nageswara Rao acted in about 255 films and was the last of the first-generation actors of Telugu film industry, which produces the second largest number of films after Bollywood.

Thousands of Chinese Cinemas May Permanently Shut Down