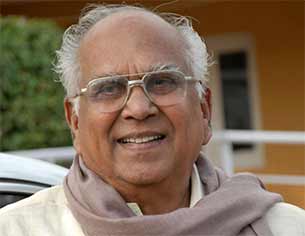 The thespian, who was battling cancer for the last few months, breathed his last at a private hospital. Family sources said the end came at 12.10 a.m. However, the announcement was made after 2 a.m.

Popularly known as ANR, he is survived by three daughters and two sons, including popular actor Nagarjuna.

He was born on Sep 20, 1924, in Venkata Raghavapuram in Krishna district of coastal Andhra.

The Dadasaheb Phalke award winner acted in about 255 films. Before he fell ill, he was shooting for a film titled "Manam" with his son Nagarjuna and grandson Naga Chaitanya.

ANR, the last of the first generation actors of Telugu cinema, had called a press conference in October last year to announce that he was diagnosed with cancer but declared that he has a strong will and wants to live up to 100 years with the wishes of his fans.

He made his debut in 1941 with "Dharmapatni" and his journey in the film industry continued for over 70 years. He became famous with "Devadasu".

The thespian was a recipient of many awards, including the Padma Shri, Padma Bhushan, Padma Vibhushan, Raghupathi Venkaiah Award and NTR National Award.

The death of the veteran actor sent shock waves through the Telugu film industry which makes the second largest number of films after Bollywood.

Eminent film personalities and politicians rushed to his house in Jubliee Hills to pay their last respects. The body was shifted to Annapurna Studio Wednesday morning to enable his fans to pay tribute.