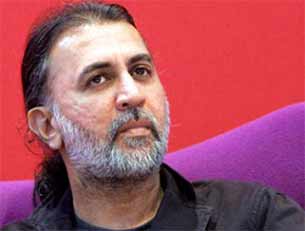 Tehelka editor-in-chief Tarun Tejpal's name appears to have illustrious company in the FIR which charges him with sexual assault.

Along with the journalist-novelist, the name of Robert De Niro, the legendary actor who played Don Corleone in "Godfather 2" finds inadvertent mention in the first information report, a copy of which is in IANS's possession.

De Niro was the biggest star at the Tehelka Thinkfest, a high profile conference held in Goa last week, at a five star resort Grand Hyatt, where a junior employee of the weekly newspaper has accused Tejpal of sexually assaulting her twice in an elevator.

"Let's go wake up Bob (Mr. De Niro) and I asked him why he wanted to do that. I then realized that Mr Tejpal was simply pressing buttons on the lift's panel to make the elevator stay in circuit, preventing it from stopping anywhere, and for the doors to open," says the FIR quoting extensively from the written complaint sent by the victim to Tehelka's managing editor Shoma Chaudhury.

The FIR was filed by police inspector Sunita Sawant at 2 p.m. on Friday.

De Niro, had in all likelihood retired for the night in his VIP suite at the Club House in the resort, only a few metres from the scene of the alleged crime.

The other reference to De Niro is in the FIR's following page where the victim has been again quoted from her complaint to Chaudhury as saying: "The door opened on the second floor, on Mr. De Niro's floor - and he (Tejpal) said again - 'The universe is telling us something' to which I said 'I'm taking the stairs' and started to walk out. He pulled me back in, sensing that I was on the verge of hysteria - by this point, he was totally comfortable physically manhandling me, but sensing my sheer panic."

The FIR also says that police had tried contacting Chaudhury via email as well as SMS asking her to forward the victim's complaint via email, but according to Sawant, she did neither.

Finally when police called the managing editor from the police control room was the contact established.

"I contacted her from the police control room on her mobile number ************* again requesting her to forward the complaint of the victim and the other relevant information as told to her. She informed that she will go through the mail and do the needful in the matter," the FIR quotes Sawant as saying.

Priyanka Chopra praises Sonu Sood as UNDP confers him with ...
35 minutes ago