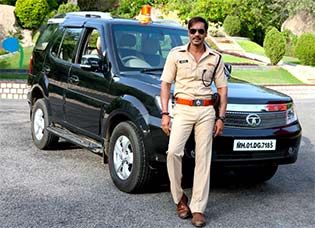 Tata Motors announced yet another exciting association with Bollywood, in the Ajay Devgn and Kareena Kapoor starrer, Singham Returns. Directed by Rohit Shetty, the film will feature a range of cars from Tata Motors, including the Safari Storme, Sumo, Aria, Sumo Grande, Xenon, and the Nano.

Speaking on this occasion, Delna Avari, Head (Marketing Communications and Services) Tata Motors remarked, "The movie and its lead characters, Ajay Devgn and Kareena Kapoor exude energy and charisma; precisely the qualities represented by our cars at Tata Motors. Hence, the ideal integration of our cars and Singham Returns".

"In India, Bollywood holds a cult status and an association of this nature is yet another example of Tata Motors' long-standing relationship with Bollywood. Tata Motors most recent successful partnerships being the mini-series '24' and the presence of the upcoming Zest and Bolt at the IIFA 2014. Celebrity engagement is vital for successful brand placements and the attributes of the brand have to be carved appropriately into the script of the movie", added Avari.

In addition to on-screen, Tata Motors' association with 'Singham Returns' seamlessly flows into the off-screen arena as well, entailing a series of initiatives across media platforms, along with exciting customer engagement activations with the celebrities.

Director, Rohit Shetty added, "Ajay is playing Bajirao Singham again, and his macho image is enhanced by the Tata Safari Storme, his vehicle in the film. Other Tata Motors vehicles have been used in the film too."