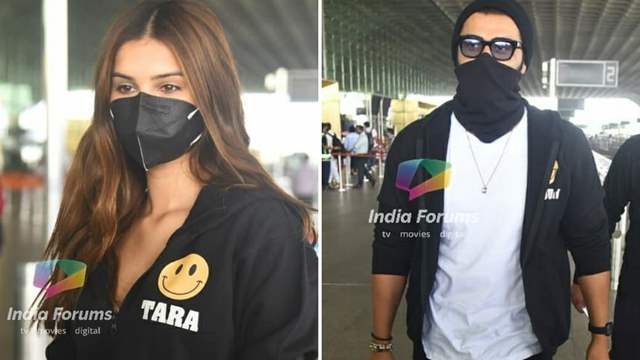 Ever since the makers of 'Ek Villain Returns' have announced the film, there has been a lot of excitement amongst the fans for the same. The film is one of the only big ticket multi-starrers that is currently on floors. Boasting of a stellar cast including John Abraham, Disha Patani, Arjun Kapoor & Tara Sutaria, the action thriller is expected to be one of the biggest releases of 2022.

Director Mohit Suri, who along with his team flew down to Goa a few days back for a quick recce, is all set to begin shooting for the movie from 16th April! On Wednesday, Tara and Arjun were spotted at the airport as they headed to Goa. The duo was twinning in matching jackets customised with their names.

The makers took this decision of shifting the shoot location after carefully analysing the rising Covid cases in Mumbai. With the possibility of a lockdown it made sense to move the shoot outside the city since it’s a large production which calls for several big action pieces, big romance portions which can only be shot on live locations.

Interestingly, Ek Villain was also shot in Goa, just like some of Mohit’s other films including Malang, Aashiqui2 among others.

Talking about taking the film’s second schedule shoot to Goa, Ekta Kapoor shares in a statement shared by the film’s team:

“Shooting during these times is hard on the cast & crew, but they’ve shown fantastic resilience and great team work and have turned things around at such a short notice; we are ready to roll this week. The scale and mounting of the film calls for live, scenic locales instead of studio floors. Also, Goa has always been a character in itself in Mohit’s films. So I am excited to see how Mohit will showcase Goa in Ek Villain Returns.”