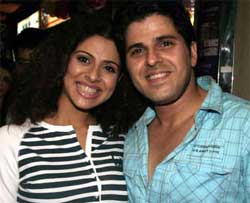 TellyBuzz gave its readers the news of Romit Raj and his wife Tina Kakkar appearing in Zee TV's Ghar Ghar Mein. We now hear that Tanaaz and Bakhtiyaar Irani who were recently seen as a detective couple in Star One's Miley Jab Hum Tum will be the next couple seen in the Zee chat show.

When contacted, Tanaaz told TellyBuzz, "Yes, Bakhtiyaar and I have shot for Ghar Ghar Mein. It was a fun-filled episode, and we played all kinds of games. There were many secrets of mine that got revealed in the show".

Tanaz further added, "Zee people had approached us many a times for this show, but we could not take it up earlier due to date problems. Now that we were free, we accepted to be part of it".

The episode featuring Tanaaz and Bakhtiyaar would be aired very soon.

12 years ago thanks... hope they can resolve the issue soon!