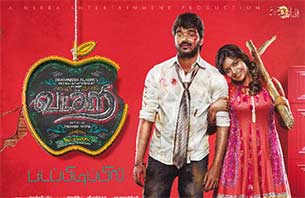 Every mentor wants his or her pupil to succeed and I'm sure filmmaker Venkat Prabhu would've expected this from Saravana Rajan, who may be a newcomer but knows how to play his cards.

When most pupils try to impress their mentors by doing something extraordinary, Saravana faithfully follows Venkat Prabhu's footsteps. In this process, he delivers a product that mirrors his mentor's style of filmmaking from the word go.

He may be called a copycat, but that doesn't change the fact that he lives up to the repertoire of his Venkat Prabhu and that's a good sign for a newcomer in a competitive industry.

Saravana weaves an engaging film with the most unexpected villain, a hero who gets embroiled in a helpless situation, a love track that's cute but doesn't run parallel with the main story, an item number and corrupt cops.

The director earns brownie points exactly in the same places where Venkat Prabhu does in his films, especially when he uses humour and entertains at regular intervals. But he also makes the same mistakes a la his mentor by not giving the heroine a substantial role and merely using her for clichd performance.

Nevertheless, the end product is not exceptional, but satisfying.

The story revolves around misuse of mobile phone and it focuses on the life of the protagonist, who claims ownership of an unattended phone because he is ashamed of his low-end handset. The result is ugly and it puts his life at risk.

"Vadacurry" has a promising story, one that connects with you instantly, but it needed powerful performances to be an edge-of-the-seat-thriller, which surely was missing. Probably because of the choice of the actors.

Likewise, there was an element of suspense revolving around the villain's character throughout the film and when it's finally broken towards the end; you don't feel chills going down your spine.

Despite these shortcomings, Saravana keeps audiences hooked with his story that dishes out all the necessary elements of a commercial entertainer.

He has a hero, a common man, who fights an organised racket where expired medicines are resold in the market, an item number featuring Sunny Leone and RJ Balaji as the hero's sidekick leaves the audiences in splits with his tongue-in-cheek humour and one-liners.

It was refreshing to see Jai in a role contrary to the ones he has played so far in his career. Saravana never tries to portray Jai as a typical Tamil film hero, but keeps him grounded and that works in the favour of the film.

Praveen's editing is sharp and he keeps the film short at 122 minutes.

Debutant composers Vivek-Merwin churn out couple of melodious numbers in an otherwise mediocre album. Saravana's intention to produce an entertainer with the combination of suspense and fun seems to have paid off.