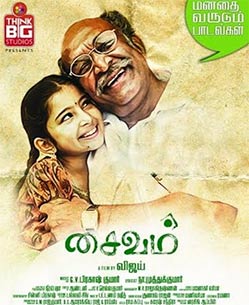 Vijay's "Saivam" has a lot going for it right from its title, in which the alphabet I is highlighted by a green mark usually used to differentiate between non-vegetarian and vegetarian products. Even though it addresses vegetarianism as a subject, but at heart it's a family drama filled with superstitions, familial disputes, teenage romance and culturally diverse ideologies.

Without hurting or insulting his audiences with his subject, especially after he begins his film with a tagline that it is dedicated to people who promote vegetarianism, Vijay treads a cautious path and avoids reasons to criticize meat eaters. As a result, "Saivam" doesn't turn out to be another boring movie urging non-vegetarians to turn vegetarians in about two hours (shortest Vijay film ever).

Kathiresan (Nasser) is a highly respectable man, but mostly traditional in his ideologies, in his village. Members of his family that includes his children and their children come home after three years for a family function. His house is now full of people; children playing, men casually chit-chatting about their childhood memories and women discussing about cooking. It's a happy family. A sight Kathiresan always wanted to unfold under one roof.

When everyone in the family is enjoying the reunion, a bad omen reminds Kathiresan and his wife of an unfulfilled promise to god - a rooster they had promised will be sacrificed is still alive. When the family finally decides to sacrifice the rooster, it goes missing much to the amazement of everybody.

The vegetarianism subject runs in the backdrop of a family drama in "Saivam", which subtly addresses all the issues through the eyes of Tamizhselvi (fittingly played by seven year old Sara).

Tamizh is raised in a village, goes to a corporation school, is always traditionally dressed but speaks fluent English wherever needed. Tamizh's cousin, almost her age, named Sarvanan (wants to be called Shravan), joins the family reunion from Dubai. He prefers speaking in English over Tamil, hates his own name and regrets not updating his Facebook wall even on a holiday.

When most parents pay enormous amounts as donation to send their kids to the best schools to get educated and speak fluent English, we wonder what's wrong in the kind of education Tamizh receives in her school. In another scene, Tamizh asks her mother the rationale behind offering something in return to god. It makes us wonder how Tamizh can think and behave beyond her age and successfully convinces us.

Most common issues found in any family are abundant in "Saivam". A daughter-in-law who is not able to conceive and is always asked about it by everyone, a son who blames his fate for bad luck at work, another son who believes farming is below his dignity and so on. Like every family, this one too believes it's the unfulfilled promise to god that's responsible for their pain and suffering. It's so easy to blame the almighty for your problems and you know what's more stupid? Thinking that he will fix it when you offer something in return.

Without ever trying to be preachy, Vijay addresses these issues appropriately. Known for usually working with superstars, Vijay has two heroes in "Saivam" - child artiste Sara and the film's story. Tagged as a commercial director, he uses humour to entertain us at regular intervals. It's a film that evokes laughter even with a host of newcomers and unfamiliar faces.

Vijay also manages to extract best performances from an unknown cast. Although the film is not devoid of cliches, you tend to overlook them for the overall effort. Nasser and Sara are brilliant, while newcomers Baashaa and Twaraa along with some supporting actors chip in with heartwarming performances.

"Saivam" is a mixed bag of emotions. It is Vijay's best and most original work so far.