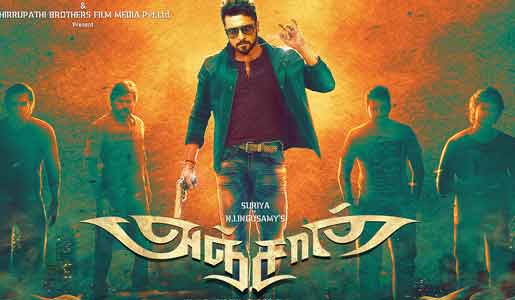 "Anjaan" is like a battle between Suriya, the star, and Suriya, the actor. Interestingly the film features him in a double role - one is a star and the other is an actor. But the director has focused on the star only.

Suriya, who didn't mind playing a buck-toothed, dark, ugly hunchback Chinna in "Perazhagan" or a con man in "Pithamagan" or the grim police officer in "Kaaka Kaaka", didn't hesitate to experiment, but the film's plot backfired.

The Suriya we saw in those films may not have been a star then (or maybe he was), but audiences loved him as much as they like him today.

"Anjaan" comes after Suriya's recent blockbuster "Singam 2", and the makers assumed that his success streak would help "Anjaan" in wooing the audience.

To cash in on Surya's success, N. Lingusamy rustled up a gangster revenge drama, inspired by several desi gangster films, but lost the plot.

Shot in Mumbai with a host of Bollywood actors, who are excruciatingly awful in their roles, it also has a romantic track. Samantha romances Suriya, dances with him in a bikini and the crowd goes berserk.

There are punchy dialogues, which are repeated in every fight scene.

There's comedy too, but it hardly evokes laughter.

Look at the irony of Tamil cinema - movies made here can't have many dialogues in Hindi because audiences won't understand. But the filmmakers worked with Bollywood actors in the film because the scrip demanded so, but they were not allowed to dub in their own voices, as they can't speak Tamil.

So when these actors appear on the screen, you get the feeling that you're watching a Hindi film dubbed in Tamil. This is precisely why Manoj Bajpayee, one of the finest actors in Indian cinema, always looks like a clown in Tamil films.

Vidyut Jamwal, who was last seen in Tamil film "Thuppakki" as a cold-blooded terrorist, had impressed because his dialogues were in Hindi with a voiceover in Tamil.

It worked when audiences watched the film. He was accepted and appreciated. It was not the same with "Anjaan".

Suriya gives an earnest performance in "Anjaan", and there's absolutely no doubt about it. But he's let down by a weak script, terrible performances by the rest of the cast and lengthy narrative.

He should stop do films that do justice to his potential, rather associating with films like "Anjaan".

It is high time Lingusamy, who is reluctant to change, accepts the fact that age-old formula doesn't work anymore.