View Profile
The celebratory plans for the bicentennial of  SAB TV's Taarak Mehta Ka Ooltah Chashma are full of punch and zest, just like the show itself! 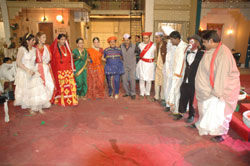 Featured Video
The popular comedy show will treat its viewers with a fun marathon titled- 'Taarak Special Week'. Viewers will get to see one-hour special episodes on three days – the 28th, 30th and 31st of July. These episodes will feature special festivities like Divaso Vrat and Ganeshotsav. It will also show the residents of Gokuldham society having party time by doing rain-dance and playing Antakshari.

Anooj Kapoor, Business Head of SAB TV says, "When Taarak Mehta's concept was proposed to me, there was no show like it running at that time. But I did not doubt the credibility of the show because the concept is so unique. It's the kind of clean comedy that the whole family can enjoy together. Also its meaningful comedy because some social issues are also highlighted. And today I'm glad I believed in the show."

Dayaben aka Disha Wakani owes it all to the viewers. She says, "I'm glad that the viewers have accepted us and enjoy our work. I wish that they would continue to support us in this journey filled with laughter and happiness."

Taarak Mehta aka Sailesh Lodha feels that along with success comes accountability. He says, "Two hundred episodes is no small deal. It's a long journey that the actors and viewers take together. Initially our responsibility was to make people like the show. But now that they love us, I think we actors should strive to give them the best of what we can. Now there is added responsibility."

Jethalal aka Dilip Joshi expresses his gratitude in sweet and simple words. He says, "I thank all the viewers for making place for Jetha, Daya and the entire Gokuldham society in their hearts. I wish to be in their favor forever."

+ 5
13 years ago Thankss
Congrats to the Team, I love this show and hope it goes on for many more years.

13 years ago congratzz to the team of TMKOC

+ 2
14 years ago Yoga is effective,true but a proper diet can lend a helping hand too.