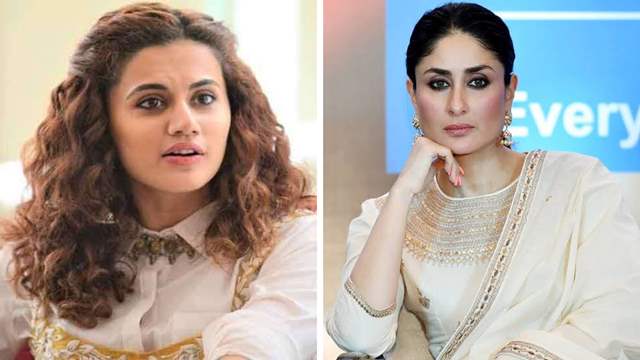 Bollywood actress Kareena Kapoor Khan had invited trouble after a report suggested that she will be seen essaying the role of Sita in the film.

A recent report had suggested that Bebo has hiked her fees for the period drama film, and has demanded a whopping 12 crores to play Sita in the film. While there has no official announcement about the same, it had irked several netizens who had taken to social media to troll Kareena.

Now actress Taapsee Pannu has come in support of Kareena Kapoor Khan and stated that it's a sign of ingrained sexism that only women are criticised for hiking their salaries, whereas when a man does the same thing, it would be viewed as a sign of his success. She told Bollywood Bubble in an interview:

“If it would have been a man in that position, who would have asked for a particular amount, it would have been looked upon like, 'iski market badh gayi hai (his worth has improved)'. Like that guy has really achieved big success in life. But because a woman is asking for it, she's called 'difficult', 'too demanding'. It's always like that."

Taapsee defended Bebo against the trolls and added that she is a star of that status that it is within her rights to demand a hefty salary for the film. She added:

“You'll always read about this problem issue of hiked salary with women. But why not? She is one of the biggest female superstars we have in the country. If she commands a certain salary for her time, it's her job. Do you think any other mythological characters that are played by men, do you think they do it for free? I don't think so."

A report in Bollywood Hungama had suggested that Kareena was approached by the makers of Sita and she had asked for a whopping Rs 12 crores. The report cited a source who claimed that Kareena who usually asks for INR 6-8 crores for films has quoted a sum of INR 12 crores.

A group of netizens had then alleged that Kareena is hurting their religious sentiments and that the demand of Rs 12 crores to play ‘Sita’ is too much and is 'against humanity'. They had when started trending ‘Boycott Kareena Khan' on Twitter.

2 months ago Here we go again! Neither Tapsi nor the other posters (who likely have no appreciation of the value of the character to be portrayed) here get it. It’s not a male and female thing. It's not about what religion the actor follows either - although I've explained that already. It’s about the principle involved in asking for any money, let alone an exorbitant amount for an iconic role that is monetarily immeasurable. Doing this role is a privilege, not a right. Some things cannot be measured by Rupees or Dollars or whatever currency actors are paid in in India. Done right, a role like this has the potential to immortalize anyone doing it for eons to come. Some people don’t qualify and lightweights like the one in question certainly do not. Unfortunately the optics don't favor her either - and this is the reality, and brutal truth of India, whether you like it or not.

2 months ago 12 crores is still too less. Actors like Akshay kumar charge absurd amounts like 25-30 crores for commercials. no one bats an eyelid then. hypocrisy.

2 months ago Absolutely true.Even though I think Kareena Kapoor can't protray Sita role but end of the day, it's her choice and decision to hike up her price.She had worked so many years in the industry. Her playing Sita should have nothing to do with what religion she is in.Whom she is married to. People should judge the actor or actress acting onscreen. Offscreen and personal lives should have nothing to do with their job. And it none of our business to get involved in.

2 months ago It is her choice to hike & discuss it with the producer to mitigate the solution as we don't know what actually transpired internally but the problem was netizens trolling religion & her child, not any gender-based remarks in the first place (unless there were tweets/trolls regarding this then that is different scenario) so involving a child/religion was wrong. News people should stop posting PDA regarding her child so much in the past as I-F did literally with majority of the articles surrounding around her children, particularly Taimur.