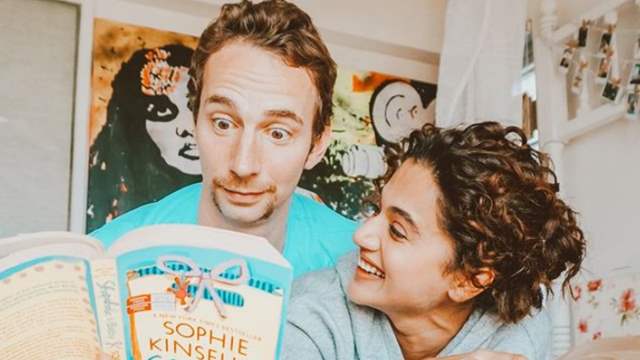 Actress Taapsee Pannu along with other Bollywood celebrities like Anurag Kashyap faced raids by the Income Tax officers at their properties in Mumbai.

While Taapsee has remained mum over this incident, her boyfriend and badminton player, Mathias Boe has taken to social media to speak out and has also sought help from Union Minister Kiren Rijiju.

Mathias took to Twitter and shared that Taapsee’s parents are stressed post the IT raid at her house. He wrote: “Finding myself in a bit of turmoil. Representing Flag of India for the first time as a coach for some great athletes, meanwhile I-T department is raiding Taapsee’s houses back home, putting unnecessary stress on her family, especially her parents. @KirenRijiju please do something."

The Union Minister also tweeted back to Mathias and asked him to stick to his professional duties and wrote: “Law of the land is supreme and we must abide by that. The subject matter is beyond yours and my domain. We must stick to our professional duties in the best interest of Indian Sports”.

Meanwhile, the investigating agency had released a statement that read, “During the search, evidence of huge suppression of income by the leading Film Production house compared to the actual box office collections has been unearthed. The company officials have not been able to explain the discrepancy of around Rs. 300 crore. Evidence related to manipulation and under-valuation of share transactions of the production house amongst the film directors and shareholders, having tax implication of about Rs. 350 crore has been found and is being further investigated. Evidence of cash receipts by the leading actress amounting to Rs 5 crore has been recovered. Further investigation is going on."

+ 3
1 months ago These big stars don’t pay taxes, find loopholes with best lawyers and us middle class people always paying every penny. And then when questioned, they behave so entitled. Wow!!

+ 6
1 months ago Law is supreme. If Tapasi has not committed any fraud she will be free.. if not she should suffer