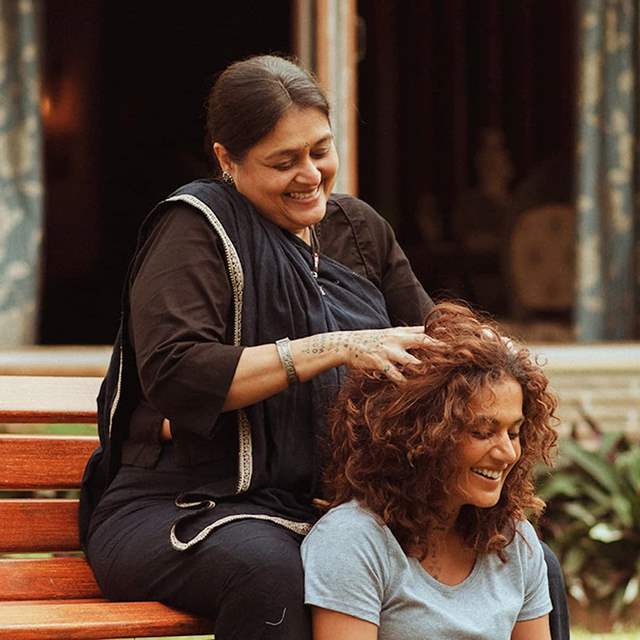 Rashmi Rocket has been under work for quite sometime now. We have kept entertained and anticipated with Taapsee's fitness videos and preparation snippets for her role in the movie. However, the latest thing we have to look forward to is Supriya Pathak's first look from the film.

On occasion of her birthday her look has been revealed.

The photo shows Supriya in black saree, sitting with a huge smile on her face she is massaging her onscreen daughter Taapsee's head. Both of them can been seen smiling. The caption accompanying photo reads, "Maa ke haath = BEST champi ever!????"

Supriya Pathak plays the role of Taapsee's character Rashmi's mother. The mother daughter duo shares a good equation as the first look at their picture suggests. The movie has struck the right chord with the viewers. Tapsee has also given quite a few glimpses of her character preparation and BTS videos which show how dedicatedly she has worked for her next.

The Taapsee Panu starrer is a sports drama and will be directed by Akarsh Khurana. The shooting for film began recently and the movie is currently being shot in Ranchi.

Abhishek Banerjee and Priyanshu Painyuli also join Tapsee in the movie as co - stars. The movie is written by Nanda Periyasamy, Aniruddha Guha and Kanika Dhillon. The film being bankrolled by Ronnie Screwvala along with Neha Anand and Pranjal Khandhdiya is slated to release in 2021.