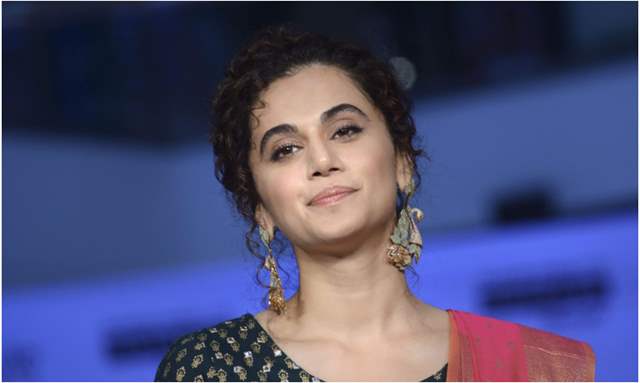 Sushant Singh Rajput’s sad demise shocked the entire nation and fans are mourning the loss of a talented actor. Fans have once again raised their voices against Nepotism, Bollywood’s lobby culture and injustice towards outsiders.

While the debate about the issues in Bollywood continues to surface, netizens are trying their best to keep the conversation alive. Several actors have been the victim to such issues and many Bollywood actors have raised their voice against the same. While Kangana Ranaut’s revelations have sparked controversies on the internet, after she called them ‘needy outsiders’ and accused of trying to win Karan Johar’s favour.

However, post these accusations netizens couldn’t stop themselves from taking a dig at Taapsee Pannu and Swara Bhaskar for their comments regarding the whole debate.

Now, Taapsee has hit back at a twitter user who accused her and Swara Bhasker of standing with ‘oppressors’ and hinted that they would be responsible ‘next time a struggling actor gives up on life like Sushant Singh Rajput’.

The Twitter user’s comment read, “God forbid next time a struggling actor gives up on life like Sushant Singh Rajput please do remember how @taapsee and @ReallySwara stood with oppressors. What an unfortunate, bitter world.”

“Next time another outstanding talent gets scared to even enter our industry n kills his passion and hope to contribute to Indian cinema coz some people painted purely negative picture about how outsiders are treated do remember YOU are ALSO responsible for it,” replied Taapsee in her response to the Twitter user.

In an interview with Republic TV, Kangana Ranaut called out Taapsee and Swara as she said, “What I want to convey through this interview is... for me, I have only to lose here... because I know tomorrow they will get some 20 needy outsiders like Taapsee Pannu or Swara Bhasker who will get up and say, ‘Oh! Only Kangana has problems with nepotism. We love Karan Johar’. If you love Karan Johar, why are you both B-grade actresses? You are both better looking than Alia Bhatt and Ananya (Panday). You both are better actresses. Why don’t you get work? Your whole existence is proof of nepotism. What are you telling me about how happy you are with the industry?”

Meanwhile, on the other hand, Taapsee Pannu had hurled similar accusations at Kangana by saying, “I refuse to be bitter. I refuse to take advantage of someone’s death for personal vendetta and I refuse to make mockery out of the industry that gave me bread and identity.”

AmandaS 2 months ago I'm not Kangana's fan but I do think she has a point. Maybe it's how she articulates herself and sometimes she comes across as defensive which she would be from trying to defend herself all the time. Tapsee didn't have to answer, she could've kept it moving like everyone else. Unless she never lost to nepo kids. Also, I think some people misunderstood the 'B-grade' comment. Kangana thinks Tapsee is better than nepo kids but she's getting 'b-grade' quality work because better movies are for nepo kids.

Aamir Khan Can't Contain his Happiness after Turning a ...
5 minutes ago

Shekhar Kapur Appointed as President of FTII Society & ...
11 minutes ago