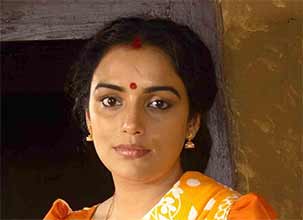 Actress Swetha Menon Sunday said she met Kerala Chief Minister Oommen Chandy and informed him about the Kollam incident earlier this month when a COngress MP allegedly groped her.

"I had said last week that I will meet the chief minister and I have kept my word. Yesterday (Saturday), I met him and told him what had happened to me at the function," Swetha told reporters here at a function.

Last week she alleged that Congress MP Peethamabara Kurup groped her at a boat race function in Kollam. On Nov 2, she showed the "visuals" from TV channels, where the lawmaker was shown getting close to her during the boat race.

But the next day, Swetha withdrew her complaint.

"I withdrew the complaint after my aged father, my husband and my guruji asked me to do so," said the actress.

She made this volte face after giving her statement Nov 3 to the Kollam police following which the police were forced to register a case against Kurup. Now the case will be closed as per the law.

Meanwhile, Kollam district Congress president Prathapa Varma Thampan, criticised Swetha for her action and has approached the police with a complaint that he has received threat letters.

Juhi Parmar shares a hilarious incident about a 'Mistaken Identity' on ...