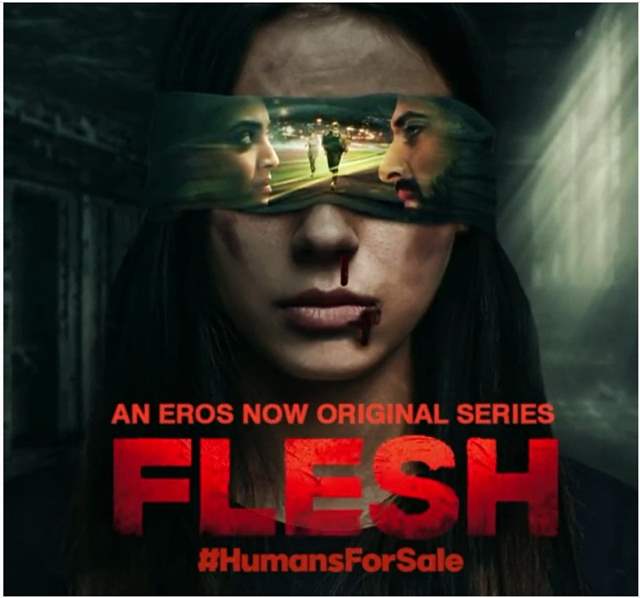 Eros Now has been consistently impressing viewers worldwide with its array of fresh and innovative content. The platform has now surprised the audience by unveiling the motion poster of its much-awaited original series ‘Flesh’. The poster, dropped today, gives a perfect sneak peek into what’s in store for the viewers. While, the motion poster gives a strong message on the heartwrenching topic of human trafficking, it features Mahima Makhwana blindfolded depicting a state of vulnerability. We see Swara Bhaskar and Akshay Oberoi in pivotal roles engaging in a fierce stare- off.

This one of a kind, eye-grabbing crime-thriller original series will shed light on the rising numbers of cases of human trafficking. Produced by Siddharth Anand, and directed by Danish Aslam, Flesh will tap your emotional sentiments. With the perfect combination of thrill and mystery, the poster looks one of the finest of this year.

Starring big screen faces like Swara Bhasker, Akshay Oberoi,Yudhister, Vidya Malvade and Mahima Makwana, Flesh will give the audience an eye-opening understanding of what goes on in the dark. The series will portray topics that are not only a concern in India but also globally.

Taking to the social media, Eros now has unveiled the motion poster of the original series Flesh: Motion poster:

Releasing soon on Eros Now, the poster has definitely set the ball rolling for this series. Only time will tell how the series will unfold.

Ayushmann Khurrana Reacts to Being Voted as One of the Most ...
33 minutes ago