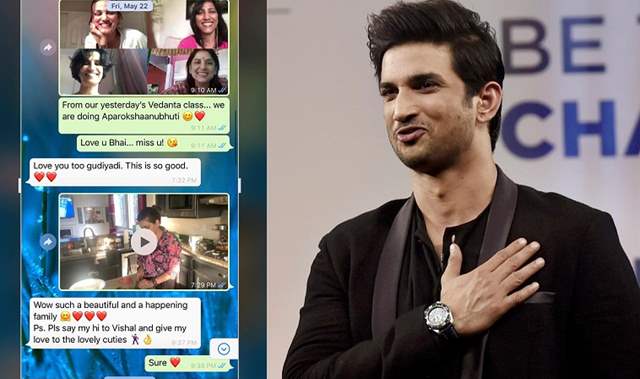 Actor Sushant Singh Rajput’s sister, Shweta Singh Kirti, has shared a screengrab of their conversation on WhatsApp, remembering the positivity that Sushant used to spread.

Taking to social media, the US-based Shweta wrote, “You loved us so dearly.” She also added the hashtags ‘strength and unity’, ‘justice for Sushant Singh Rajput’, and ‘the strongest bond’.

The conversation in question took place on May 22, less than a month before Sushant’s death. It shows Sushant reacting to pictures and a video of his sisters. “Love you too Gudiyadi. This looks so good,” the actor wrote in response to a picture of his sisters attending an online class together. He also added several heart emojis.

To a video of one of his sisters in the kitchen, he wrote, “Wow such a beautiful and happening family. Please say my hi to Vishal and give my love to the lovely cuties.”

Sushant’s family in recent weeks has ramped up its allegations against Sushant’s girlfriend, Rhea Chakraborty. An FIR has been filed by Sushant’s father against Rhea under multiple sections of the Indian Penal Code. It has been alleged that she took control of the actor’s finances, isolated him from his family, and got him hooked on prescription medication. Rhea has denied these allegations.

On Wednesday, the Central Bureau of Investigation was given the go-ahead by the Centre to take over the investigation of Sushant’s death. The agency is likely to re-register the FIR filed by Bihar police under IPC sections related to abetment to suicide, criminal conspiracy, cheating among other charges on a complaint from the family against Rhea.