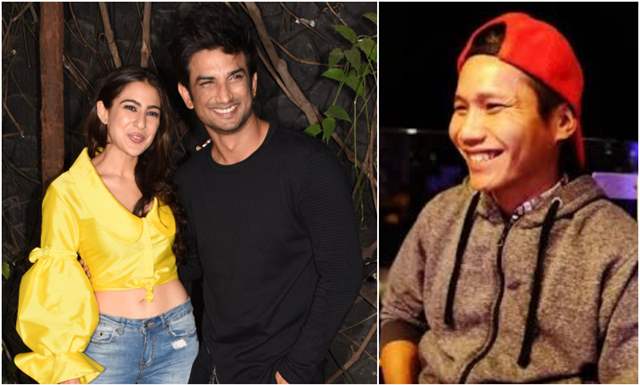 The recent development in Sushant Singh Rajput’s death has surprised the fans after his friend Samuel Haokip recently shared an explosive social media post wherein he spoke about the late actor’s relationship with Sara Ali Khan. The late actor’s death has unveiled the murkier side of Bollywood and many believe it was due to pressure that they had to break off.

A recent Times of India report quoted Samuel Haokip speaking volumes about Sara and Sushant's bond and relationship with each other.

Sara and Sushant worked in Kedarnath and they were rumored to be dating while working for the film. Describing their relationship, Haokip said, “During Kedarnath promotions… Sushant and Sara were totally in love… they were inseparable… so pure and childlike innocence. They both had tremendous respect for each other which was so rare to see nowadays in relationships.”

Speaking Sara and Sushant’s rumored relationship, and why they might have called it off, he said, “You know how a regular relationship is like. Maybe back then there were several factors involved that they didn't want to talk about. But somewhere it feels like these things, even the MeToo, as his friend and someone close to him, we still don't know why he did what he did or what exactly happened.”

He added, “Do you think a person like Saif Ali Khan is going to come and talk to me? It's not going to happen. I just felt that it would be unfair if people don't know the entire truth and it's not like am putting any kind of an allegation or trying to divert any investigation, it's just that no one was talking about these things. Maybe because no one had that courage as everyone is from the industry so maybe that's why they never spoke about it. And maybe Sushant also, as even he was from the Industry but now since he's not there, it's something I as a friend should get some kind of closure on which is why I posted it.”

Furthermore, he also explained why his recent post did not unveil any personal or private detail of anyone. He also revealed they used to hang out all the time and Sara was also a friend.

“Going into the details of it, it may turn this from general to a very private thing. So that's why my post didn't touch any personal or private detail of anyone but at the same time, I wanted closure. Sara was also a friend as we all used to hang around together and now I cannot just accuse her of something of which even am not sure about as no one has given me in writing that I broke up with you because I was pressurized with someone,” he said.

Samuel also spoke about the equation that Sara and Sushant shared. He also maintained that he shared a slightly better bond with Sara than Rhea. He also pointed out that their energy was really pure.

During my time there, Sara and Sushant had broken up and then Rhea had come in his life. So I always felt that he shared a slightly better bond with Sara. As I mentioned in my post, they used to respect each other. They used to share poetry with each other and seeing them together felt like watching a movie. Even when both of them were trying to have fun together or flirt with each other, they were very respectful to one another as they knew that there were people around them. The things that they said, always used to make her smile. Their energy was really pure.

The Supreme Court finally raised the green flag for the CBI probe in Sushant Singh Rajput’s death investigation. Speaking about the same Samuel said, “I am happy as it has been a while since Sushant's fans from all over the world have been asking for a CBI probe in the matter and it's not just for the family but also for the accused people as well. Once the truth comes out then all these fans and family will get closure. And this verdict is one step towards closure, especially for the family.”

Samuel Haokip was close to the late Sushant Singh Rajput. In his recent social media post he said that Sushant and Sara ‘were totally in love’ and ‘inseparable’ during the promotions of their film, Kedarnath. However, she broke up with him after the failure of his film, Sonchiriya.

Bakugo 3 months ago Sushant never spoke a single thing about him and sara while he was alive. Probably because he respected their privacy! It’s a shame that people don’t value his choice anymore