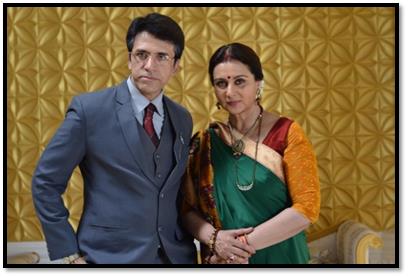 Sony Entertainment Television's unique saga Ekk Nayi Pehchaan is soon going to take some major twist and turns.  As the viewers would have seen that Sharda (Poonam Dhillon) has been selected to go to London for a special annual adult literacy conference.

But the question then was will Suresh agree to it? Well now we have the answer to this, in an upcoming episode Karan (Karan Sharma)-Sakshi (Krystle Dsouza) will be seen convincing Suresh to give the permission to Sharda.

At first being admant and manipulative Suresh will initially disagree but with a shock of everyone he will be seen eventually agreeing. Hearing the news Sakshi will be seen starting the preparation but Sharda will been having a doubt.

How come Suresh agreed to it? Will Sharda able to discover the real truth?

Sooraj Thapar talks about the legacy of Akbar Ka Bal…Birbal, not being ...

Ro-001 6 years ago If all sets will we see a LOndon trip? It will be awesome

kryanfan1 6 years ago confused..!
Is suresh really ready or is there some motive of his behind this also??