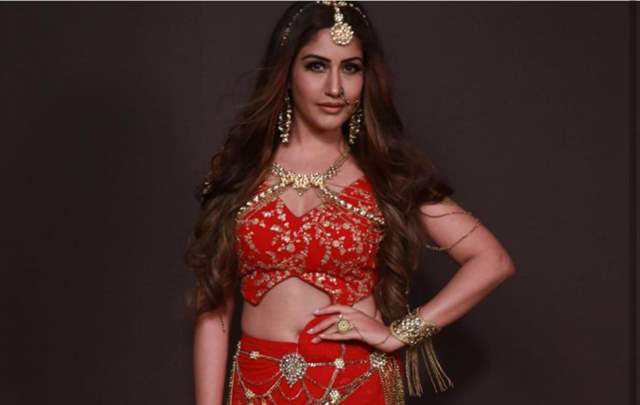 Naagin 5 has now undergone a revamp of sorts with an all-new cast of Surbhi Chandna, Mohit Sehgal and Sharad Malhotra taking over from Hina Khan, Mohit Malhotra, and Dheeraj Dhoopar. The franchise in itself has managed to create a mark on Indian television and now, the actors have only made it bigger with every season.

As Surbhi takes on the role of Bani in the supernatural show, we got into a candid conversation with her where she got talking about all things Naagin 5, and some more.

How do you like the look, it created quite a stir online. Did you give any inputs?

Honestly, no personal inputs because this is just a huge franchise and has been going on for years, so they know what they want. The two biggest mysteries are nothing but one about who will the Naagin be and the other, about how will she look? In fact, the look was a mystery for me as well and I was just told the colour is going to be red. When I first saw it, I fell in love with everything and I was also excited, much like I have always been about the looks for all the Naagins earlier.

What was the thought process of you saying yes? Especially given you are someone who has tried different genres, was this show an easy yes?

As an actor, I have always tried to experiment with the work I do, be it the bubble girl (Ishqbaaaz) or the serious doctor (Sanjivani 2) and now, this is a fantasy world that I have never tapped. I received a call about 3 months ago and I wasn't sure if I will be able to do this. Balaji and I have been trying to work together for a very long time, be it the web platform or other times when I was not doing another show. And, every actor has it on their wish list to tick off Balaji, and we were trying to work something out. When I got the call, I did not know if or not I am the right person and that was that. It is a big responsibility on your shoulders and it is a big brand, and there is so much excitement around the show, even I had it for this season.

We are only human, and we are likely to draw comparisons when a new season a successful show comes out, it is natural for someone to think is she doing the right thing, or similar stuff. Everyone has left their own mark, from Mouni Roy to Surbhi Jyoti, or Nia Sharma, and of course, Hina Khan along with Mohit Malhotra and Dheeraj Dhoopar have set in a strong foundation for the show. I got another call after 3 days from the creative team and I insisted we can work around some other show, but they insisted as well and it took us 2 weeks to finalize on something, but when your team gives you a boast and confidence, I never forget it. When I was on a zoom meeting with EK and she was giving the narration, I was like I don't know what will I do, but I will do something and this was my first interaction with her, and I still have doubts even though I said I am convinced. She said you will be rocking and when your boss says something like this, there is nothing beyond that, and every day, I come with that focus. I think the online response is good, now how does the response of the audience works out, we will see.

Hina Khan introduced the show, and it was in no time that there happened to be constant comparisons, even trolling for that matter. How do you deal with them?

I don't really read all of this and I always say that please maintain things, because that is the kind of person I am - fun, happy, peace, and all these things bothered me earlier, when I newly started. However, now I feel that people are sitting around and while some will say good, some will say bad, but you cannot say anything to everyone and they are entitled to their opinion. If someone tries to stop me from saying something, they cannot do that. Hina has always been so kind, we have met at award shows and we chat sometimes, she has sent her best wishes to me. Even when the film released earlier, she called me for it and I wanted to watch it. She is someone whose journey is to appreciate, it is a matter to ponder upon as to how beautifully she has come so far and it is commendable. All three of them have set a beautiful foundation and that is how the story was, that of rebirth. The beginning has been different, with two heroes and one heroine, unlike the previous seasons. We feel that we can do justice, rest is the love from audiences.

You've somehow always had shows with great content and response, but TRPs suffered. With Naagin, does it feel content that you're sorted on all fronts?

Ultimately, the profession that I have chosen, of an artist, I am going to be on various platforms, but if I take the stress of this system, I will never grow, and if I cut that out, then I'll be stuck. My idea as an artist is this, I want to have this feeling that I should not get sleep thinking how to get things right, the idea behind doing Naagin 5 is also the fact that it is a fantasy world, something I have never done. There is no fun in doing the same thing! The numbers will be taken care of, we will do what we are supposed to! My challenge is to move from one thing to another, and that is what I am doing and I have convinced my mind and soon, I will experience something new.

Will we see glimpses of the SC from Ishqbaaaz in Bani?

Bani is someone who is calm and is sorted in the head, she is a lovely girl, has a connection with her sister which is lovely and she is an adopted girl, this girl has her own challenges. I hope later in this, we do something that is bubbly.

Have you seen the past seasons? Who would you call your favourite Naagin?

I have missed out on most of the seasons, and from whatever I have seen, I obviously cannot take any one name because I am sure they must have faced the responsibility I am facing right now during their time as well and do their best. I think no one has taken this lightly and everyone has done their job beautifully and looked smashing. All I want is to have a 'patli kamar' like them! (laughs)

How have you been keeping up with your co-stars and the on-screen equation with Mohit and Sharad?

How is it been shooting on sets with the team and your off-screen equation?

These are rather difficult times and we are adapting to the new style of working, and we have been a little unfortunate because as soon as the previous season ended, the new season began so we never got enough time to settle down. I shot and it was on the air, but the vibe on set is beautiful. Both Mohit and Sharad come with their experience, I am the new one here, it is fun and they impart a lot of knowledge. It is a happy team (touchwood) and we have just begun, gradually, we'll get comfortable with everyone!

Sharad Malhotra on people consuming drugs and alcohol: Not seen anyone ...