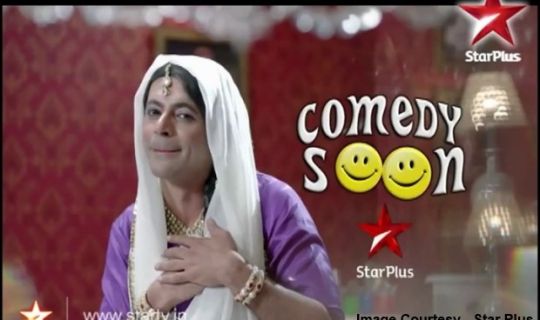 Ace comedian Sunil Grover who has tickled the funny bone of the audience by playing the character of Gutthi in Colors' show Comedy Nights with Kapil will be seen in a new show on Star Plus titled as 'Mad in India'.

Confirming the news our source says, "Sunil Grover is coming back to his comedy genre once again in a comedy show titled as Mad in India. The show is all set to replace the dance reality show Nach Baliye Season 6 and will not clash with Comedy Nights with Kapil on Colors."

While Sunil Grover and the team has been trying to keep his show's name a secret our source confirmed it saying, "Sunil was recently heard talking excitedly about the show to a fellow actor. He also mentioned the time slot of 9 PM."

With his hilarious acts and rib tickling gags, the actor will be seen in the feminine avatar as Chutki in the show Mad in India' and it is also being said that Manish Paul will host the show. The audience will have to tighten their seat belts for this laughter ride as the weekend will become more joyous and humorous.

However, having played the similar character in Comedy Nights with Kapil, the audience will once enjoy the performance of Chutki which is quite similar to that of Gutthi.

It will surely be a dose of entertainment for the viewers post the dance reality show Nach Baliye Season 6.

-poloenigma- 6 years ago loool i can't wait for this show to get a ' Babaji ka Thullu' from viewers all over the world :P

MANISH PAUL is so hot and sexy . i wish i could have kissed him and slept with him .

Moon-Sparkle 6 years ago Traitor! He got all this fame only cuz of CNWK otherwise he was just a cameo actor n would come in comedy circus on sony tv for just random episodes. If he was till in comedy circus. i bet u he wouldnt be able to pull off a show for himself like this! so all thanks to Kapil for helping him getting there and he left kapil! boo!!

mandy001 6 years ago na ji hum to kapil ke fan h nd cnwk hi dekhenge...nt intrstd in ds shw bt yes may be i vl give a chance to ds shw only for manish paul bcz he rocksss bt i knw i vl nt like it. ...

infact manish nd kapil both rocksss...love to see them together.

luvakanksha 6 years ago sunil is just overconfident guthi/chutki is not meant to be watched for an hr its entertaining for 10 min and thats it you should have continued cnwk ...kapil sharma is a great comedian

ap8412 6 years ago I don't think i can watch sunil for 1 hr show ever. If the matter was 10 min then ok..
But. Seriously he and starplus trying to give competition to cnwk.. which will be impossible.
Kapil sharma is best comedian. Even when he says one line which makes people laugh but. Sunil had to dress up like girl to make people laugh.

We all love kapil sharma. Believe or not, he is the best comedian in our industry...

-GredForge- 6 years ago this is going to be a huge flop! who the hell is going to watch snil as a woman for an hour? no way i prefer watching KNWK - Kapil rocks&lt;3

_GurIkaholic_ 6 years ago Mad in India will rock ...Sunil Grover is an awesome actor and Love Manish Paul too !

Fukrey 3 Team Kick-starts their Work ahead of Shooting; ...
16 minutes ago