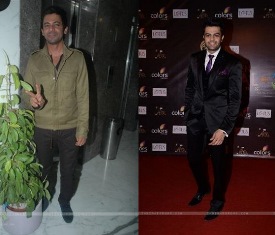 We had earlier reported about Guthi a.k.a Sunil Grover quitting the K9 Productions popular daily soap Comedy Nights with Kapil which airs on Colors, and also that the comedian is all set to come up with his own show on a rival channel soon.
According to the latest buzz, our source informs us, "Sunil Grover and Manish Paul will be seen in a comedy show on Star Plus. The show will be produced by Sunil Grover along with a co-producer of the show who is yet not known."

The upcoming comedy show will not clash with the timings of the other comedy shows namely Comedy Circus and Comedy Nights with Kapil.  On the same we tried contacting Sunil Grover and Manish Paul to know more about the show but they were unavailable for any comments.

I hope rather Palak become more popular...she is too funny when she dance

kkkkr 6 years ago Kapil rocks no one can beat him in comedy as he was giving good space to them as when they come he always step aside... Kapil sharma rocks...

urshanaya 6 years ago Sunil is gonna commit d biggest mistake of his life...
Bad decision...
Manish u better stay frm dis...
SP is a big back stabber...
Kapil u rock bro... No show can ever take u down...

Gagani 6 years ago I hate star plus .i Don,t entertain myself with this channel.

srk_kadz 6 years ago Guthi is not in the show any more? I will miss her naughty smile and the way she introduces herself... :P

shanak.hot 6 years ago What are they littlw kids???
Seriously this is too much, kapils show will still be the best no matter what.

billy_ritu 6 years ago sunil is doing a big mistake...nd producing new show... a big no
kapil is the best comedian...

luvakanksha 6 years ago this very bad i mean making a rival show? i thought manish suniel and kapil sharma were friends ...why are they ditching kapil ...i hope this show is a flop...kapil always used to stand aside whenever guthi came and he used to give enough screen space to him

serendipitous 6 years ago Sunil could have done both shows, since Gutthi character is very small and CNWK is just once a week. Hope things work out in future when tempers calm down, PHes can be pretty boorish and dominating to actors cause they have the power, so I would like to give the actor the benefit of the doubt.

Rhea Sharma to be seen in Ekta Kapoor's next?
32 minutes ago