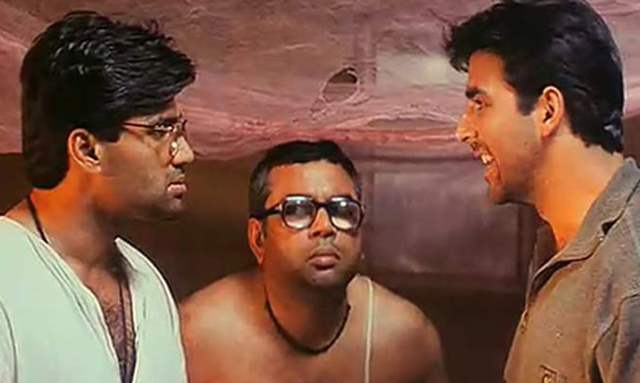 Priyadarshan’s Hera Pheri is one of the most acclaimed films and one of the most hilarious films’ as well. While Akshay Kumar, Suniel Shetty, and Paresh Rawal poured their heart and souls into the performance several cast and unit members worked equally hard for this film. Today, the iconic comedy film completes 20 years, and actor Suniel Shetty revealed what it was like to shoot for the film.

In a conversation with IMDb, he also shared how director Priyadarshan managed to get the best performances out of his actors.

Speaking to IMDb, Suniel said him, Akshay Kumar and Paresh Rawal were made to sleep on the ground during the film’s shoot.

I don’t know how the film was made, it just happened. We arrived on the sets every morning, the costumes were basically just stretched and given to us, not even ironed. The director would ask us to sleep in the afternoon on paper, so we used to sleep on newspapers. He (Priyadarshan) said I don’t want you to be comfortable. When you get up, you should have rested, but stay uncomfortable. So, we wore no makeup, nothing. Akshay Kumar, me and Paresh ji were constantly together, constantly rehearsing our lines, constantly improvising and Priyan sir is one man who knows when to say cut.

Hera Pheri narrates the story of, Suniel and Akshay played Shyam and Raju who are tenants at the Mumbai home of Babu Bhaiyya, played by Paresh. The three devise a plan of earning a quick buck off a child’s kidnapping but things don’t always work in their favor.

Suniel also shared how he and Akshay were majorly action stars before this film. “It was a film where action heroes were doing comedy and being controlled by someone like Babu Bhai, so audiences must have found that very amusing,” he said.

Even today, after 20-years of its release, Hera Pheri is a hit and it is considered among the best made Hindi comedy films ever. It also starred Tabu and Om Puri.