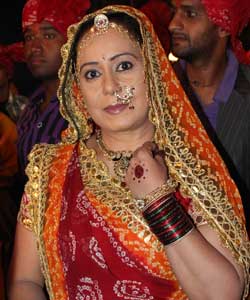 When Sumeet Mittal casted Neelu Waghela for the character of Bhabo in Star Plus' Diya Aur Baati Hum, never had he known that she was considered as one the finest actress in Rajasthan.

A source says, "Recently, the crew was shooting in Pushkar and Sumeet was astounded to see the reception that Neelu got there. Seeing her people went go crazy and were eager to get an autograph or click a picture with her."

TellyBuzz contacted Neelu, who expresses her amusement."This is my first Hindi show and I have been receiving a great response for the character. People in Rajasthan were going crazy when we went there for the shoot. Sumeet ji was shocked to see a boy touching my feet. But I must say that the role is extremely difficult to portray because I have no traits of Bhabo, in real life."

Neelu also describes the after effects of playing the character, "When I go out these days, people stare at me and are reluctant to talk to me. But once they approach me I make it clear that I am not that tough in real."


Neelu is a famous Rajasthani actress who has received immense appreciation for the character of Bhabo in the show. Her character portrays the conservative house maker of the elite Rajasthani family.

Well, it's pretty ironic that the broad minded and pretty modern Neelu is portraying such a terrifying and stringent character.

tanind 8 years ago She is definitely talented
All the best!!!

VersatileStar 8 years ago I love this show
Neelu Ji you are one of the biggest reasons for this, as the character I love the most is bhabo
This is the first time I have seen you on tele
And I completely agree with you, the role is extremely difficult to portray
I really wonder how you manage to act so tough with superb expressions & command on your dialogues, when you yourself say that you have no traits of Bhabo in real life
Awesome work, hats off to you :))

Ranjeeta_ 8 years ago Neeluji you are definitely doing a great job as Sooraj's Bhabo, congratulations for that and keep it up.

funalways 8 years ago she is definitely talented...makes me scared of bhabho

avanka12 8 years ago Thanks for the article. She is an amazing & talented actress keep it up

Ethereal-Path 8 years ago She's really talented !! Glad to see her taking step ahead in Hindi serials :)
All d best to her!

b2011 8 years ago Bhabho's character is amazing. Would like to see bonding between Sandhya and Bhabho.