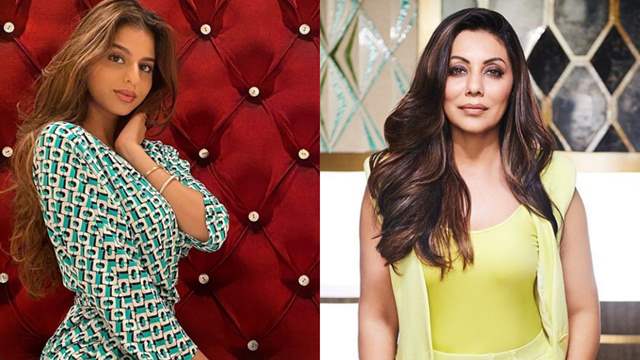 Suhana Khan took to her Instagram handle to share a lovely throwback picture of mother Gauri with Shah Rukh Khan on her birthday.

In the monochrome picture, Gauri and Shah Rukh are seen embracing each other as they are candidly clicked by the camera.

She captioned the lovely picture, ‘Happy Birthday Ma’, followed by a heart emoticon.

As soon as she shared the vintage picture, comments and likes started pouring in from all sides. Suhana's cousin Alia Chhiba and actor-friend Ananya Panday also left heart emojis on her sweet post.

Gauri’s good friend and Hrithik Roshan’s former wife, interior designer Sussanne Khan, too, left a warm wish for her. She shared a collage of the two and wrote,

“Gods Love and Grace will always be on your and your loved ones heads.. I Love you loads".

Suhana and Sussanne’s posts come at a time when her family is awaiting the release of her brother Aryan Khan in an alleged drug case.

Several industry colleagues of SRK and his fans have rallied behind him in these difficult times.

It is to be noted that both Gauri Khan and Shah Rukh Khan have not made any public appearances since their son Aryan Khan's arrest in a drugs case.

And with Aryan Khan's bail plea hearing due today (October 8) at the Mumbai Court, there certainly are no celebrations in order for Gauri as she turns a year older this very day.

Yesterday (October 7), the NCB had sought an extension of Aryan Khan's custody and seven others accused in the case till October 11.

However, the magistrate did not provide the same and instead sent them to judicial custody for 14 days. Aryan Khan's bail application will be heard today, October 8, at 11 am.

Aryan Khan was arrested after the NCB conducted a raid on the Cordelia Cruises' Empress ship off the coast of Mumbai.