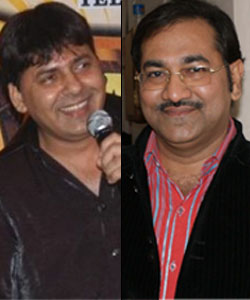 Yes, you heard it right!!  Raveena ke Punters which comprises of actress Aashka Goradia, Sudesh Lahiri, Parul Yadav and Vibha will see a change in the 5th episode!!

As per our reliable source, "Sudesh Lahiri, the stand-up comedian is out of the show now, and he will be replaced by Sudesh Bhonsle".

We hear that Sudesh Lahiri is under an exclusive two year contract with Optimistyx, and he had not brought this to the notice of Star Plus when he signed the contract for Comedy Ka Maha Muqabla. The shoot for the same commenced and the unit had shot for nearly four episodes, when Optimistyx and Sony Entertainment Television got to know of it.

A little birdie tells us, "Optimistyx brought this to the notice of Star Plus and Reliance Big Productions, and this immediately prompted the change. In fact, Optimistyx is actually waiting for a clarification to come from Sudesh Lahiri on the breach of contract that he has committed. And Lahiri might also be penalised by Optimistyx for the same. On the other hand, Star and Reliance Big Productions have now roped in an even bigger name in Sudesh Bhonsle to replace Sudesh Lahiri. Bhonsle has in fact given his nod and has started rehearsing for the show. He is due to come in place of Lahiri from the 5th episode".

We tried getting Sudesh Lahiri's point of view on the issue, but the stand up artiste told us, "I do not want to comment on this at all. As of now, I am out of Mumbai for a show".

However, Sudesh Bhonsle confirmed his presence in the Star Plus reality show, "Yes, I am going to participate in Comedy Ka Maha Muqabla. In fact, I was approached for the show earlier, but I could not make my dates available as I was to have a trip to USA. When I was offered a second chance, Reliance Big Productions gave me a clear picture of the dates they wanted from me and that helped me revise my dates for the live shows I do. I have done many live comedy shows, but this is a different experience altogether and I am looking forward to it".

We tried contacting Vipul Shah of Optimistyx to get a clear picture on Sudesh Lahiri's contract terms and even sent him a text message, but did not get any revert.

Guess at the end of the day, we can only say that Comedy Ka Maha Muqabla has gained with the presence of the hugely talented Bhonsle in it…

9 years ago was really dissappointed after seeing the show this weekend. the only gud factor in the show is raju srivastava and sudesh lahiri. with sudesh gone, i think i ll only catch rajus performance in this show. And as many have said......Comedy circus is way way better than this show

tiaranveerrox 9 years ago I'm glad tht at least raju shrivastav is in the show........

shahidzlover 9 years ago well... i was just gonna watch this show only cuz of SUDESH JI
not watching it anymore =/

MyDick 9 years ago This show made me lose faith in my dick. 1/10

+ 5
9 years ago comedy circus is wayyyyyyyyyyyyy better!!! it has all the best comedians!!
this show is just lame!

+ 3
9 years ago No Wonder Kapil is not a part of this show...
Even his name came in the article earlier....I thought he wud be there....So I was looking out for him in this show !! But he was missing...
Infact none of the Comedy Circus stand up comedians are present here....!
I didnt really like the show.....Comedy Circus is way better....In this new show...Raju Srivastav is the only good comedian !!

+ 6
11 years ago Who hasn''t?! I have watched it like a hundred times! DDLJ was a beautiful movie!