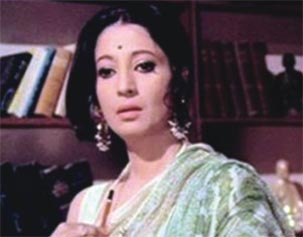 The condition of iconic Bengali actress Suchitra Sen, who was put on non-invasive ventilator support after her condition deteriorated, still requires constant vigilance due to the fluctuating oxygen saturation, a medical bulletin said Tuesday, adding that she is not yet out of danger.

"Because of continuous monitoring of her vital parameters, which might need active emergency intervention, she will continue to be observed in Intensive Therapy Unit (ITU) setting," the bulletin said.

She was put on the ventilator Jan 3.

Ruling out any immediate discharge from the hospital, Subir Mondal, a member of the team of seven experts monitoring Sen at the Belle Vue Clinic here, said her oxygen saturation level has gone up since the last few days.

"She is not out of danger yet...her oxygen saturation is not fluctuating much at the moment. We have no plans of discharging her as she is not that stable," Mondal told IANS.

Her vital parameters like heart rate and blood pressure are stable.

According to the experts, her respiratory tract infection is under control, though it still remains detrimental to her health.

The 82-year-old actress was undergoing treatment for a chest infection at the nursing home since Dec 23 and was taken to the ITU after her condition worsened Dec 28 night.

Known as the Greta Garbo of Bengali cinema, Sen is known for her performances in films "Deep Jwele Jaai" and "Uttar Falguni" in Bengali as well as Hindi movies "Devdas", "Bombai Ka Babu", "Mamta" and "Aandhi".

The screen goddess' work was appreciated offshore too - she won the best actress award for "Saat Paake Bandha" at the Moscow Film Festival in 1963.

The mother of actress Moon Moon Sen, Suchitra quit acting in 1978. Since her retirement, she has become the most talked about hermit of Kolkata as she stopped meeting people except for her daughter Moon Moon Sen, grand-daughters Raima and Riya and reportedly some spiritual gurus.

However, in a rare exception, Suchitra on Sunday allowed West Bengal Chief Minister Mamata Banerjee to meet her at the nursing home.