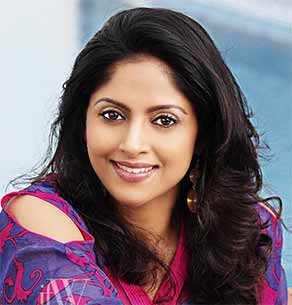 Actress Nadiya feels the success of upcoming Telugu thriller "Drishyam", directed by Sripriya Rajkumar, will encourage a lot of women directors to join the directorial bandwagon.

"Drishyam" is the remake of an eponymous Malayalam blockbuster.

"I don't feel 'Drishyam' is the film to encourage women directors to come forward to make films, but the success of it will highlight the fact that it has been directed by a woman. I think that will make a lot of difference and encourage women to direct films as well," Nadiya told IANS.

"A film's success depends on content and performances and not on whether it's directed by a man or woman. But I believe the success of 'Drishyam' will motivate a new crop of filmmakers," she said.

Nadiya, who plays the role of an Inspector General of Police in the film, says working in a remake is challenging.

"When a film has already been established in a language, it's good that it has already got enough exposure from all over. But it's challenging when you're remaking it because you have to meet the audience's expectations," she said.

However, she added: "Since 'Drishyam' has a beautiful script, chances of it going wrong is almost impossible."

Nadiya, who was once a reigning actress, recently made her comeback to Telugu industry in the role of actor Pawan Kalyan's aunt in "Attarintiki Daaredhi". Since then she's been looking to do something different.

"I agreed to do 'Drishyam' because my character has some undertone with certain nuances. It's almost like a role of a lioness that is trying to protect her family and yet is ferocious from the inside. I thought it was challenging and different," she said.

Nadiya has worked with several male directors over the years, but this is her first collaboration with a female director.

Although Nadiya was, "little apprehensive in the beginning", but the overall experience turned out to be "fabulous".

"I was apprehensive about how she will approach a film compared to a male director but I soon realized end of the day, work is work and it doesn't matter who is doing it. But the advantage was that since I was working with Sripriya, I spent a lot of time bonding with her off the sets," she said.

"We had a lot of woman talk and that helped us in the overall shooting experience. All this made working with her a fabulous experience," Nadiya added.

It was also Nadiya's first film with Daggubati Venkatesh, who reprises the lead role of Mohanlal from the original.

"Venkatesh and I have don't have many scenes together but I enjoyed working with him too. I have only known him through social gatherings and we've always had cordial chats. I have never known him as an actor, but he's a wonderful co-star to work with," she said.

"Drishyam" also features Meena in an important role. It is jointly produced by Suresh Babu and Rajkumar Sethupathy.