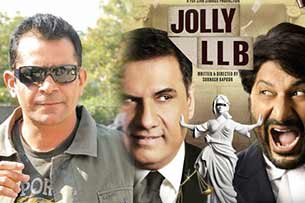 "Jolly LLB" director Subhash Kapoor says that he would not be surprised if Tamil, Telugu, Malayalam and even Bangla producers are interested in remaking the film.

The director also confirmed that there are negotiations on with South superstar Mahesh Babu for the Telugu remake.

"There are talks going on between the producer of the film and Mahesh Babu. The negotiations are on," he told IANS.

The film has done well and has been liked by the audience. The director is confident that people all over will like the film.

"I won't be surprised if Telugu, Tamil, Malyalam and even Bangla producers want to remake the film... Jolly has touched people's lives. It has helped them express their anger and concern so it is relevant everywhere," he said.

The director will be continuing his work on the script on the third installment of the "Munna Bhai" series, after this.

"My producer, Vidhu Vinod Chopra is back in town. We will be developing the script now," he said.