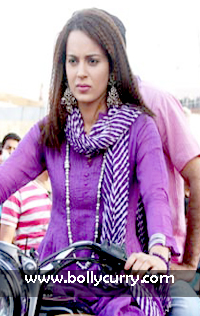 r the upcoming movie Tanu Weds Manu Kangana Ranaut plays a small town girl who dares to do everything that girls frequently don't do - like smoking, drinking, driving. Yes, driving it is indeed! During the shoot for the movie, Kangana tried riding the heavy metal bike, Bullet, which only stout man can handle.

Kangana was delighted to know she would get a chance to drive a bike. Nevertheless, when Kangana found out she had to drive the heavy Bullet through narrow crowded lanes with one person sitting behind her - it wasn't as easy as she thought.

What was feared definitely did happen! Kangana injured her foot by falling down from the bike in Punjab last year. The actress even had to cancel her film's shoot for a few days to fully recover from the injury.

From smoking to driving, what more is in the store for this daredevil?
12 Likes