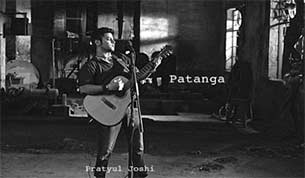 Street performer-turned-singer Pratyul Joshi recently released his first video "Patanga" and he is hopeful that one day he will make it big in the industry.

The folk music video has already gained interest and has been appreciated on radio stations and social networking sites.

Joshi is very passionate about music and knows he is capable of making it big in the industry, said a statement.

The alumnus of Film and Television Institute of India, Pune, says the best thing that happened to him was coming to Mumbai and performing street music.

His association with National street of performing arts - NGO supporting street music and also producers of "Patanga" - goes back to 2012.

"Patanga" has been an emotional journey for me, says Joshi and is summary of his travels across different places in India.