The course of true love never did run smooth- William Shakespeare
We have always heard that love at times begins with a fight and the show Kitani Mohabbat Hai is one of the greatest examples that proves it. The show gave us a cute and spicy couple on television who are completely in love off screen as well.

We are talking about the witty Karan Kundra and the equally witty and smart Kritika Kamra..

They share their cute and different love story where none of the birdies proposed, which normally happens in a relationship.

Let's hear it from them.. 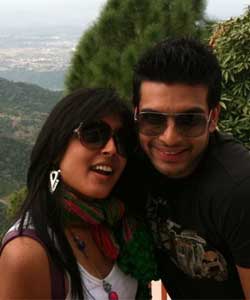 Karan Kundra says "We both met at the auditions of Kitani Mohabbat Hai and it was the auditions happening for Arohi. There were four girls with whom I tried the romantic shot where Arohi had to fall on Arjun's hands, out of which one was obviously Kritika. I don't know what Ekta saw when Kritika did the shot with me, because she instantaneously liked the chemistry between the two of us and Kritika got selected then and there."

Kritika complements "Even I really don't know what Ekta maam saw in that one minute about the chemistry we could share. On the contrary, when I did the act, Karan thought I was cockeyed. And the first impression that I had about him was that of the Pakka Punjabi boy who is very concerned about his look and is always busy".

She adds "At the first meet, there were no such feelings that we felt, but never did realize when that feeling came deeper into the hearts".

"As time passed on we became best of pals on the sets because we understood each other and respected each others' work. And after seven to eight months we thought about taking the friendship to the next level", Karan adds.

Kritika goes on, "Our relationship grew more on a spiritual level where we accepted our qualities and flaws and we didn't have a choice on that (laughs). Also we never wanted to tag our relationship with a particular name".

Karan shares "Initially when we were not seeing each other, everybody on the sets used to think we actually were and when we said we really are dating, their reaction was 'we already knew it and you guys were lying in the beginning' which we actually were not. There were a lot of surprises in our relationship."

This couple has a great time fighting. Surprised? Read on!!!

Karan says "All the scenes in show where we fight, are taken in one single shot because they come out naturally and in fact we actually fight that well. And we have a good time fighting when we are traveling because, whenever we decide to go somewhere, either me or her will be late."

"I think a recent fight that went on for seven days was the one which happened last month. We hardly talked those days and in the end the situation was that we actually forgot the reason for which the fight actually began. And I had to go and talk to him because Karan was in no way going to manaofy me. He has certain issues that have to be there", Kritika adds.

Kritika also adds what she likes and dislikes about her partner, "Karan is very genuine about his feelings for people and cares for the ones he loves, and can never be diplomatic. But at the same time, he is very short tempered".

What about the Valentine's Day plans?

"There are no special plans as of now, but we are going to Delhi this week and Aditi and Mukti will be accompanying us; we are going to have a great time there", Karan says.

He conveys a cute Valentine's Day message for the viewers "This is the season of love and love is in the air. No worries if you don't have a Valentine till date, try getting one during this time".

Kritika too gives her wishes to her dear fans "Do something special for your loved ones not just on a Valentine's Day, but every day and make them feel special."

Evidently, Karan Kundra and Kritika Kamra make the coolest couple onscreen and off screen as well. They have their mutual understandings even in their fights.

We wish them a lovely Valentine's Day wishes.

9 years ago our sweety cute KARANIKA...love them sooo much