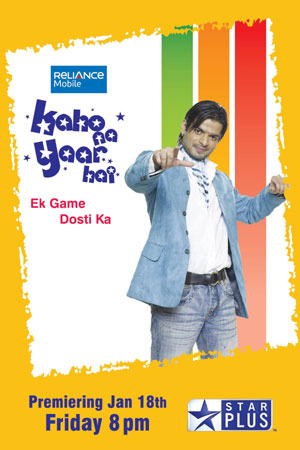 STAR Plus, the leading Hindi General Entertainment Channel is set to enthrall its viewers with a new celebrity game show ‘Kaho Na Yaar Hai’ from January 18th, every Friday, 8 p.m. – 9 p.m. Adding to their list of firsts, STAR Plus offers viewers, the first reality show where celebrities and their best friends indulge in funny, mischievous and interesting games and thereby undertake the true test of friendship. The team (comprising of the main celebrity and his/her two friends) with the highest score emerges a winner. Optimystix Production is the producer of the show.

Commenting on the new launch, Anupama Mandloi, Sr. Creative Director, Programming, said, “STAR Plus has always been associated with unique show formats. KNYH is one such show which celebrates friendship in the craziest of ways. The show features celebrities with their best friends, competing in two separate teams and is an entertaining mix of warmth, fun, madness, camaraderie, revelation and sheer high spirits. This show promises to bring a smile to everyone’s face”.

Kaho Na Yaar Hai will witness participation from celebrities such as Sajid Khan, Dia Mirza, Mallika Sherawat, Sonu Nigam, Ronit Roy & Gautami Kapoor among many others. The show will be anchored by the well known, handsome and vibrant actor turned anchor Karan Patel. Karan has had a successfully acting stint in various Balaji shows and is also currently playing the male lead character in STAR Plus’ prime time show ‘Kasturi’. With this show he will venture into a new world, that of anchoring. Kaho Na Yaar Hai will engage the viewers and test the compatibility of the celebrities with a slew of games that will put the celebrities and their friends to test through various rounds such as a physical round and much more.

So here is your chance to know how mischievous your favorite celebrities were or even the craziest thing that they have done with their best friends and get to know the many facets of your favorite celebrity on ‘Kaho Na Yaar Hai’, starting Friday, January 18th, 8 p.m.-9p.m. only on STAR Plus!!

14 years ago Ahh, she is too pretty!
I loved her acting in Awaara Pagaal Dewaana...Cant wait to see more of her movies!
THanxx

14 years ago LOL!
the show is hilarious
and espicially the Sonu Nigam Eppy!
i wass dieing!

14 years ago I think its going to be a fantastic show..looking forward to it..