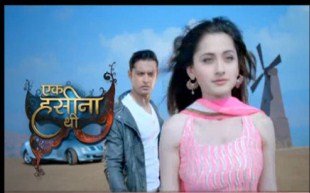 Star Plus' latest offering - Ek Hasina Thi is a story unlike any other on Indian Television. Set in the eastern megapolis of Kolkata, this is not a revenge story but a story of a woman seeking justice for a crime committed in the past. However, her methods of claiming justice are unconventional as she steps out of the shackles of traditionalism and utilizes her mind to conquer Might!

The fight to deliver justice for an inhuman crime is a universally moving theme. It is also equally true that 'When all else fails and one is pushed to the brink, one is compelled to take an extreme action'. Ek Haseena Thi tracks the journey of such a woman Durga (played by Sanjeeda Shaikh), who has decided to become an active agent of change to achieve her motive of justice. Durga is not only rich, brave, focused with a heart of gold but is also strong, powerful, calculating and manipulative, using her intelligence to stay a step ahead of her adversaries. She doesn't mind stepping over the boundaries of right' and flirt with the dark side, but she always remains within the confines of good, never losing touch with her humanity.

However, Durga's fight is not easy as facing her are the extremely powerful and influential Goenka family - the main antagonists and the target of Durga's actions. Vatsal Sheth plays the role of Shaurya Goenka who is the rich, womanizing scion of the Goenka clan. A playboy and brat who is not used to hearing the word NO, Shaurya knows that with his family's influence, he can get away with anything. Standing by Shaurya through thick and thin are his parents - Sakshi and Rajnath Goenka (essayed by Simone Singh and Ayub Khan), whose financial muscle and stronghold over the city automatically make them both a revered and feared opponent. Durga's task is further complicated when she faces multiple hurdles as relationships, romance and her own emotional conflicts play a role in making her question her actions.

Talking about the show, Mr. Gaurav Banerjee, General Manager, Star Plus said, "Durga is a very exciting character. Through her, we are celebrating the Empowered Woman - she is primarily a nurturer but if wronged, instead of suffering silently she will fight for justice. We believe our viewers will enjoy the lavish scale of the show, the beautiful outdoors of Kolkata and performances of the ensemble cast."

Mr. Siddharth Malhotra, Creative Producer, Cinevistaas said, "We are excited to present Ek Haseena Thi, a show we have been developing over three years. Our vision for the show was to elevate it to a completely film like experience. Therefore we haven't compromised on anything, right from the way the characters are presented to the overall  treatment, action, sound, locations and sequences every aspect has been given a larger than life feel. We have had an amazing relationship with Star Plus and are happy to have collaborated once again for Ek Haseena Thi."

Will Durga be successful in her mission or will she too fall aside like every other person who has stood in the way of the Goenkas? Who will reign supreme in this challenging battle of wits and intellect, where everything seems to be a fair game!

+ 4
6 years ago Durga is really a powerful character! Reminds me of strong female characters like Shanti and Rajni in past! Refreshing change on Star Plus. Sanjeeda Sheikh is doing a great job! Durga will kill all demons and get justice for her sister!

+ 5
7 years ago wow sanjeeda in a show after ages! will defo watch this, loved her in promos.. :)

+ 3
7 years ago Interesting.
M waitring for it!
Just one more day! Aah!

+ 3
7 years ago Seems like revenge. Will watch it for Sanjeeda and Simone.

7 years ago And then of course the heroine would get married to the hero, and saas-bahu drama would start.

...Nothing new then. Everything comes back to that cliched track.

7 years ago is this show sort of like Revenge. hopefully not.

7 years ago Best of luck to sanjeda...excited to see after soo long...she z my fav actress

7 years ago Waiting for the show. If I am not mistaken Pratyusha was to play the Bong Bahut in this show along with Vatsal Seth and Sanjeeda and Harsh Chaya. Has her role gone to Sanjeeda?