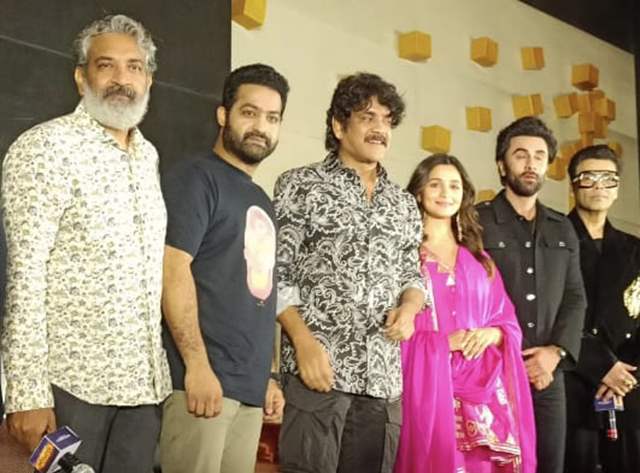 Unquestionably, Brahmastra is one of the most anticipated Indian movies currently. When filmmaker Ayan Mukerji was filming Yeh Jawani Hai Deewani in the snow mountains in 2012, the concept for Brahmastra first came to him. Ayan has been working on the project for about ten years, and that only includes the first book of the trilogy. It is not just the most ambitious film ever filmed in India, but it also cost the most to produce. The movie will have a fairly broad release throughout the world, and the producers have enlisted SS Rajamouli to present it in the South. A week before the movie's release, Hyderabad hosted a large pre-release celebration. While the event got postponed, a press conference was held which was graced bh the cast of Brahmastra, Karan Johar, NTR and Rajamouli.

When SS Rajamouli was asked about his association to this ambitious project, he said,

"There is a lot of difference between the kind of cinema Karan Johar makes and I make, but I admire his passion for cinema. 5 years back, he told me about Brahmastra with a mad boy called Ayan Mukerji. I agreed due to respect I had towards him. I knew nothing about the film. When Ayan started narrating about these Astras to me, all my childhood fantasies came to life. He has put in a lot of energy in creating this Astraverse. Everyone is emotionally charged in using the weapons. This kind of film needs to be supported. Its about the superpowers we have in our culture, forklore. Everything about Brahmastra is in Indian tradition. I am doing all I can to represent the film in South markets."

The inclusion of SS Rajamouli in the production has vastly enhanced the film's popularity.

The film is slated to hit the big screens on 9th September, although there will be Thursday night previews in the US prior to the global premiere. Ranbir Kapoor, Alia Bhatt, Amitabh Bachchan, Nagarjuna Akkineni, Mouni Roy, star in the film.