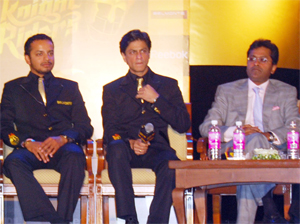 Featured Video
Speaking about the tie up, the spokesperson of the online gaming portal Zapak.com said the reason to choose Shah Rukh was in keeping with the hugely popular film star's background as an avid online gamer. He said that the move aims to create a community of Kolkata Knight Rider's fans.

Zapak.com has also said that it would be spending Rs one crore on the marketing initiatives and the tie up projects for co-branding. The portal would be supplying content for the IPL team's website. Presently, there are only two games hosted on the website and eight more would be added. The company may add more games after seeing the response to the hosted games. The games can be accessed absolutely free on the website.

Speaking on the partnership with Zapak.com, Shah Rukh Khan said, "We were looking for someone who could capture the essence of cricket and at the same time promote Knight Riders as the best IPL club. Zapak.com with their custom-built games around Knight Riders will give the gamers an opportunity to feel and be a part of Knight Riders."

The online company already hosts 18 cricket based games on its portal, and claims to have recorded more than 80,000 users playing cricket on its website everyday.