View Profile
If there is a mega star who never forgets to own the roots he hails from, it's the ever modest Baadshah Khan, SRK.

Yet another time, he bids to return to the small screen, after after having reigned the big one for close to two decades. His very first encounters with the world of acting had been via TV media in shows like Circus and Fauji; more recent ones were anchor stints, and most recently the superstar shot for Colors' newest show, Sasural Simar Ka. 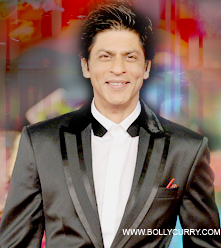 Apparently, the star was quite excited about his come-back what he calls 'home' and hence sort out some time from his choc-a-bloc schedule for the shoot of the show which took place in Khan's Bandra residence, Mannat.
His agreement to do a cameo in the series is entirely credited to the plot, which appealed the star Khan in an amusing way. It revolves around the story of a girl who's willing to go any lengths to make her dreams of becoming a professional dancer come true!
Barring his hosting of shows like Kaun Banega Crorepati, Kya Aap Paachvi Paas Se Tez Hai, Zor Ka Zhatka, this is SRK's first appearance in a daily-soap since he lodged himself as a star in B-Town.
In Sasural Simar Ka, he plays a judge in a reality show Chak Dhoom Dhoom, wherein Simar strives to be one of the participating dancers without bringing it to her family's notice.
While the trend of doing cameos in daily soaps has sort of picked up over the last couple years - Rani Mukherjee-Vidya Balan (Naa Aana Iss Desh Meri Laado); Abhishek Bachchan (Balika Vadhu); Salman Khan (CID), Akshay Kumar (Sasural Genda Phool)... among others - this is certainly SRK's first time.

And while in all other cases the motivation is promotion of upcoming films, SRK does it purely in the spirit of the show itself!

Sara Ali Khan heads to Mumbai as she receives summon from ...
58 minutes ago