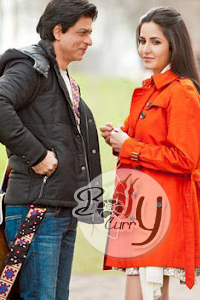 Only recently BollyCurry brought you news about the YRF project bringing together SRK and Katrina Kaif onscreen for the first time, with Anushka Sharma featuring as the third in this love triangle plot.


Now while the latter actress remains to make it to the shooting locale in London, we already have a surprise to share with the anticipating fans straight from the sets!
A still of SRK and Kat from the movie. The misty forest trail backdrop, the guitar reminiscent of DDLJ days, even the red coat clad damsel feels like deja vu! SRK is finally back to what he does best, woo his lady onscreen and win the hearts of his charmed audiences! Add A.R.Rahman's music, and Gulazar's lyrics to that, so that the album will live up to the reputation YRF has for delivering chartbusters. Finally, mark the project as Yash Chopra's directorial return (after the epic Veer Zaara), and you know this is a movie to watch out for!

Slated for a Diwali release, the movie and the album are still a while to go. Meanwhile, a movie still teaser should be something to begin with.

Does the sight of those two in a frame make your heart go thud, vintage YRF style?!