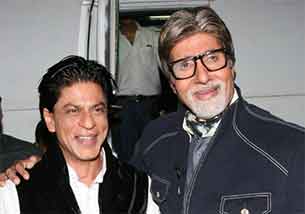 Megastar Amitabh Bachchan and superstar Shah Rukh Khan are on top of the Bollywood scene, but they aren't as competent when it comes to competing with their grandchildren and children at video games and adventure sports.

Amitabh, who is busy spending the New Year with his family, shared his experience of a Jet Ski adventure with his grandchildren. The 71-year-old has three grandchildren - Agastya, Navya Naveli and Aaradhya.

"The Panama...the sea...and after getting beat on Jet Ski by grandchildren," Amitabh posted on the microblogging site Tuesday.

Shah Rukh Khan, who enjoys playing a video game version of FIFA invited Amitabh for a friendly game as he is tired of being "beaten at all games" by his kids.

"Sir, take out time tomorrow (Wednesday)...let's do a little FIFA...I am also tired of being beaten at all games by kids since last few days," SRK posted on Twitter Tuesday.

SRK, who is married to Gauri Khan, has son Aryan, daughter Suhana and surrogate son AbRam.