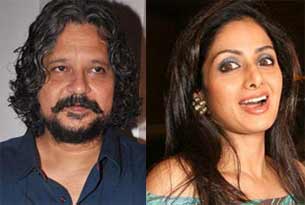 The cast of the forthcoming movie was present at the event.

Sridevi, who had danced to the number of the same name in the movie "Mr. India', said: "I have always been associated with 'Hawaa Hawaai' with 'Mr. India', but today it has a new meaning."

Amole's son Partho, who plays a prominent role in the film, was excited to have Sridevi to unveil the film's trailer.