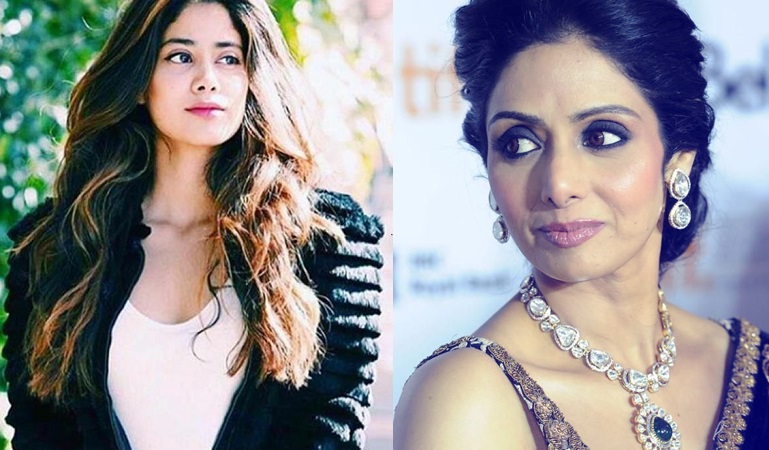 Jahnavi Kapoor has been in the news for a long time now, mainly for her Bollywood debut. A lot of speculations and stories revolving her entry in the Hindi filmdom have been making rounds.
Jhanvi has been the talk of the town with audience labeling her as the "star in the making". Everyone is waiting with bated breath to see the young girl on the silver screens. But, looks like her mother, Sridevi isn't keen with her daughter joining the industry.
Recently, she shocked everyone with her statements related to Jahnavi's upcoming ventures.
As we all known, various B-town stars are busy promoting their offspring and are trying their best to get them a golden ticket to the Hindi filmdom, but Sridevi stands apart! She wants her daughter to get married and settle down instead of entering the film industry.
During an interview for her upcoming film Mom, Sridevi was asked about Jhanvi's future plans.
To this, she said: "She wanted to do the film (SOTY 2) and initially, I wasn't in favour. I don't think it's a bad industry. I am a creation of this world. But as a parent, it would give me greater joy to see her married. But her happiness matters more, and if she does well as an actress, I will be a proud mother."
Sridevi has been in the industry for decades, she began her career in the industry at the age of 13 and even after such a long association, she feels that her daughter shouldn't have the same life. And we too agree with her, because before being an actress, she is a mother and a mother would always want the best for her child.

chaotic_mess 3 years ago proves that just going to fancy schools and colleges outside india,wearing designer clothes,partying day and night doesnot really make u modern and liberal.Had she been a truely liberal mom she would have said "I would love to see her successful in whatever she loves to do".

Vartika07 3 years ago Stereotype mother, if industry is that bad than what are you doing here still? I didn't expect this from her.

Anju.. 3 years ago i wish she said it will be greater joy to see her work in any field but she said marriage???